“It doesn’t matter where you are, all you need is a pen and paper” Oleg Sentsov

Freed in the Russian/Ukraine prisoner swap in September after serving more than five years of a twenty-year jail sentence after being detained in Crimea by the Russians on trumped-up terrorism charges, Oleg Sentsov talked to co-artistic director of Belarus Free Theatre Natalia Kaliada at Frontline in London. 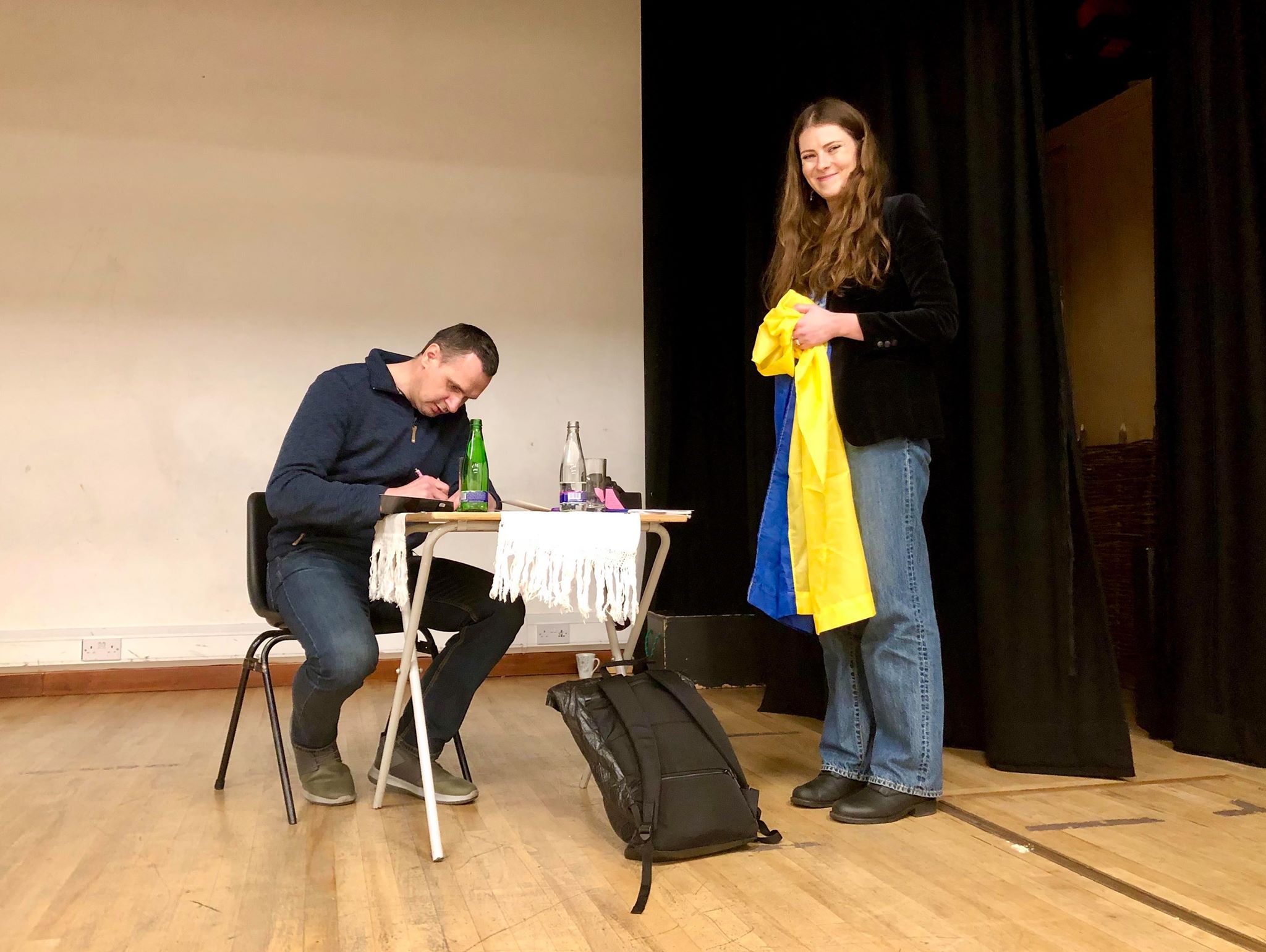 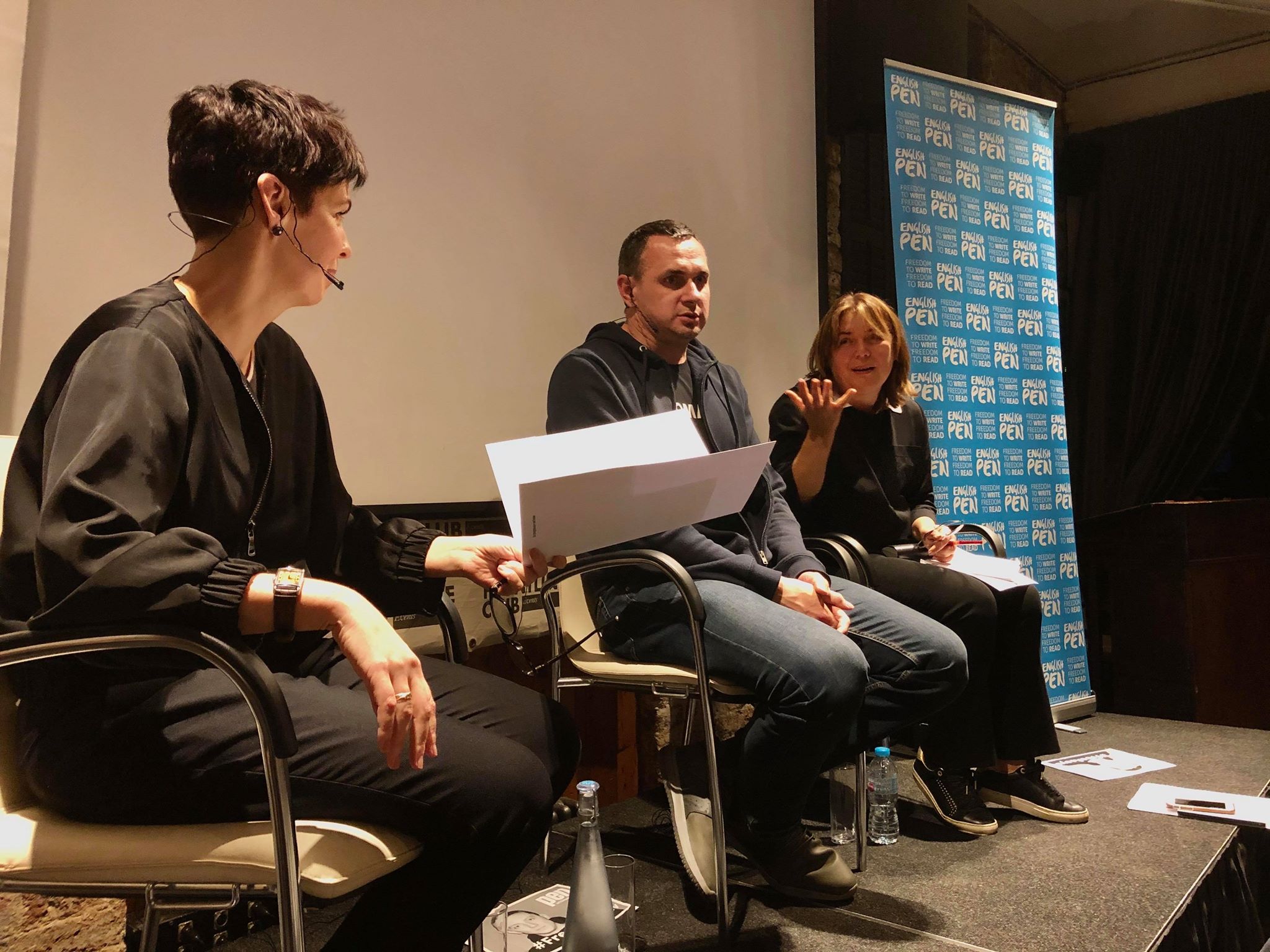 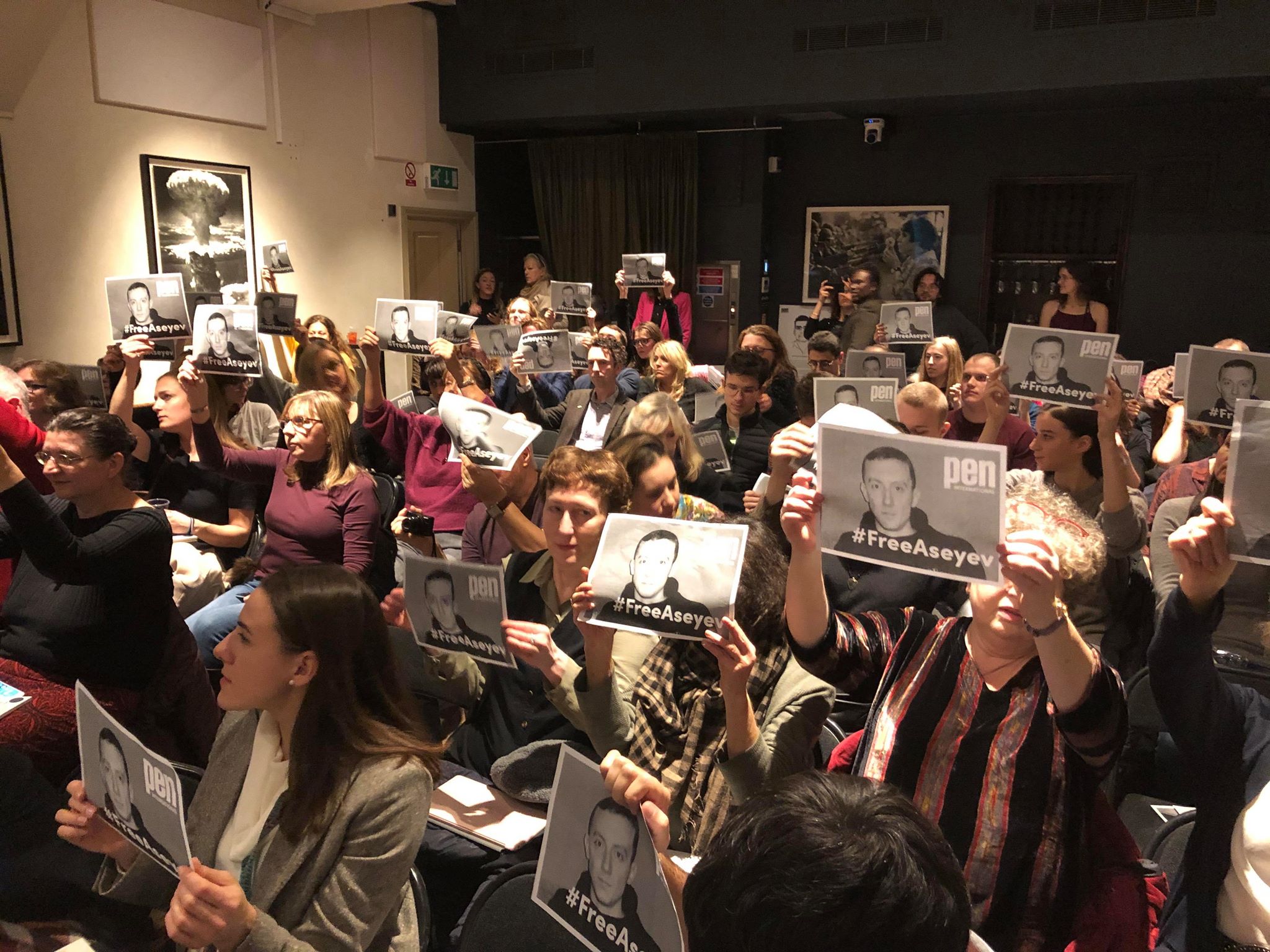 In some ways, Sentsov has become the unintentional human face of Russia’s war crimes in Ukraine and Crimea and of its wrongful imprisonment of hundreds of “political prisoners” in Russia from surrounding former satellites who dare oppose its policies. Many of these political prisoners make up Crimean Tartars, a group little talked about in the media in the West. Sentsov’s undoubtedly been the most famous prisoner and a constant thorn in Putin’s side. He’s suffered torture, the psychological trauma of believing he would not be freed until into his 60s, separation from his children and family and a 145-day hunger strike during the World Cup as a personal appeal to President Vladimir Putin. Yet he comes across as completely serene and calm. His serenity must be easy for him to channel; because he possesses one of those greatest of tricks–to turn the baseness of horrendous personal dangerous experience into artistic and comedic gold. During his time behind bars, he’s managed to write books, scripts and collaborate outside with creatives on a stage and film version of his play Numbers. His extraordinary output has prompted Kaliada’s necessary question about the ability to acquire creative inspiration during such a time–his answer heads this essay. He elaborates “inspiration is inside me” when Koliada presses for more detail. Famously during this session, the longer Koliada’s questions become, the shorter Sentsov’s answers are–at least about himself. They form a performance art double act, Sentsov the perfect humorous foil to Koliada’s serious intensity–and Sentsov’s performance, we realise right here, bordering on humour and sarcasm which aims to provoke and disturb, is probably how he survived his horror-filled experience. No one can get near him unless or until he chooses to let the mask slip.

This ability to separate his personal self from the realities happening around informs his attitude to art and politics and ironically, it is Koliada’s next question.

How do you merge being an artist with politics? asks Koliada. Sentsov doesn’t. “What I am doing in art and politics is very different” he asserts. Weirdly, his assertion is backed up by Putin himself. In a documentary about Sentsov, Putin (unaware he would appear in a supportive film about him) stated Sentsov was not being judged on his body of work (previous films such as Gaamer), but on his supposed actions in Crimea. This attitude of Sentsov’s–to separate himself away from his political actions, probably protects him from the kind of state control Russia is trying to exert in its own and in other countries.

“Russia is a totally totalitarian state.” I don’t know if Sentsov is aware of the alliteration, but it’s brilliant. But he is beginning to get passionate. He says the bid for control over spaces and minds has moved to direct control over how people live and what they think. A small group of people in Russia are aware this is happening, Sentsov continues. But the majority are brainwashed. Influenced by state-owned media and TV, their view of the world beyond its borders is distorted. “Russia is the best, Europe is rotting, the US is bankrupt, everyone in Ukraine is a fascist.” Now as Sentsov talks about what makes him passionate, his answers are longer than Koliada’s questions.

The Ukraine question. What should the world do?

“EU countries do not have guns attacking Ukraine and shooting innocent people,” says Sentsov grimly. (This is what Russia is doing to Ukraine, even now. )“We all understand that Putin is raging a hybrid war in Europe through politics and money–but in Ukraine there are weapons. Ukraine is giving the lives of our soldiers for this whether you help us or not.” In other words, why should the oppressed (Ukraine) tell the unrepressed (the west) what to do?

Ukraine is on the frontline of Putin’s war.”

Koliada hints at it as the UK government continues to suppress a dossier that might detail Russian illicit activities and influence in British democracy, which in Koliada’s words, is an interference on the freedom of information act and might influence the freedom of 60 million people in the UK. What is Sentsov’s advice for the UK? Sentsov is unequivocal. “The UK citizens have to work it out themselves, find their own path and find out what they must do.” There is perhaps a stunned silence in the room. This might not be what people were hoping he might say. He justifies: “If we didn’t meddle in other people’s lives, none of us would be sitting here right now.”

But presses Koliada, what did Ukraine do when Putin and their former president Viktor Yanukovych made their gas deal, thus forcing Yanukovych to reject the opportunity of a future with the EU? We know what they did–people hit the streets, the same day there was The Madian. Sentsov knows this too: “It was the Raging of Revolution of dignity” he says. Koliada laughs. “I am cheekily answering my own question,” she says to the room and people cheer.

“Putin is not a peacemaker, he wants to influence the world, take over Ukraine. He does not want peace, we have to understand,” asserts Sentsov. Elsewhere in another interview, Sentsov has asserted that young Russians, the children of oligarchs, gain an education about freedom here in the UK only to return to Russia to enforce Putin’s oppressive regime.

Some questions from the audience: “How has Ukraine changed whilst Sentsov has been away?”

Sentsov acknowledges the change, a new leader in the form of Volodymyr Zelensky. In other interviews, he has also asserted that somethings have got slightly better. The court system. The election itself was fairer. But there is a long way to go. One big change though: more of the population is gaining a “European” mentality instead of a “Soviet” one.

“How can the mindset of Russia be changed?”

Russia is a dead-end both socially and economically. It can’t stay in a dead-end. It will collapse, either quietly or be explosive, like Yugoslavia.

A question from Cormac Smith, who has been a strategic communications advisor to the Foreign Minister of Ukraine.

“More and more countries in the world are abandoning Ukraine. US, France are and others. What do we do? Stop sanctions on Russia?”

Sentsov insists that sanctions (despite the latest reporting in the Evening Standard) hurt Russia and that they should continue. But he adds that Ukraine should strengthen itself without asking for help from someone else. “The UK always followed its own independent nose. Why should Ukraine be worse than the UK?”