Seeing a play by Belarus Free Theatre in their home country can get you locked up or flung out of university. It’s forced the company to form close protective relationships with their home audiences, many of whom are themselves committed to the struggle to oust dictator Alexander Lukashenko. It’s also encouraged BFT to think particularly about their audiences outside Belarus and how they communicate with them during and post shows. But what’s particularly apparent to anyone who regularly attends BFT’s plays, is the strong invisible presence of the audiences and creative teams who support the company in secret in Belarus, who while not being with global audiences in body, are certainly there in spirit. This bond between audience, actor, and company, those who are present and not present, was imaginatively highlighted by BFT’s Staging a Revolution festival held in London, a two-week celebration of the company’s tenth anniversary.

The festival was unique because it aimed to do something else pretty unique: introduce British audiences to some of the conditions their compatriots have to endure in order to see shows in Belarus. To achieve this, Staging a Revolution was divided into two weeks: during the first seven days, audiences attended shows held in secret, and in the second installment, got the chance to experience shows in a public venue in freer circumstances. Before each performance, audiences in Belarus and the UK waved at each other via Skype across the 1,349 miles that separate Minsk and London, and after each show, the UK audience was invited to stay behind, avail themselves of the free food and drink and join the speaker-led discussion about what they had just seen.

"To be present in buildings sited for demolition or at risk of being taken over by contractors intent on turning historic pubs into plush flats, felt like a small act of anarchy." 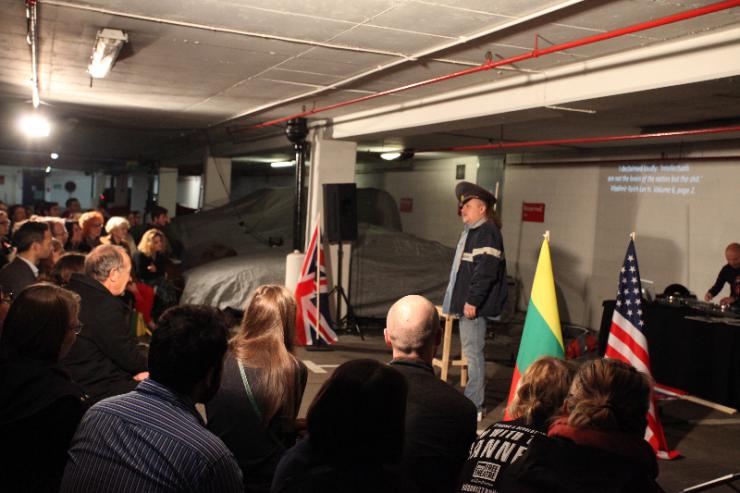 Belarus Free Theatre performs Generation Jeans below the Houses of Parliament as part of Staging a Revolution. Photo by Georgie Weedon 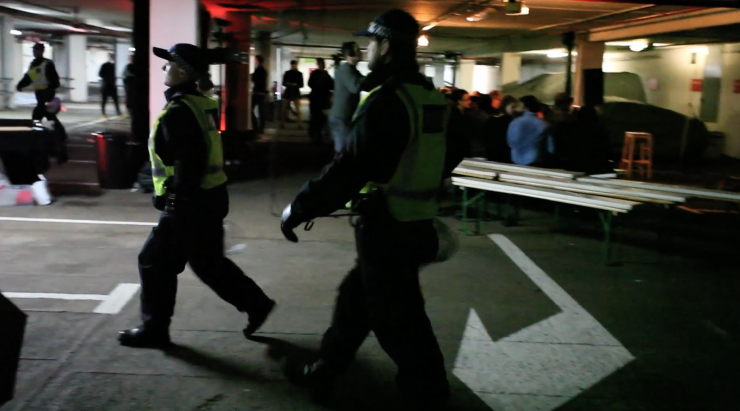 Police search the car park while the audience looks on. Photo by Georgie Weedon

Despite the obvious limitations to emulating conditions in Belarus—secret texts with details of meeting points sent the day before performances didn’t increase anyone’s chances of being arrested or having their career destroyed—the initial complicity between audience and company certainly worked to bring both closer together. The real revelations, though, came through BFT’s clever way of appropriating found venues, all which turned out to be thematically linked to each play. And to be present in buildings sited for demolition or at risk of being taken over by contractors intent on turning historic pubs into plush flats, felt like a small act of anarchy. We could have been Urban Explorers, place hackers or ex members of the harangued London Consolidation Crew, especially when the Metropolitan police clumsily searched the car park under Parliament’s chambers during Generation Jeans (performed on Guy Fawkes bonfire night November 5 and almost in tandem with the Million Mask March going on above).

Explorations of unexpected space gave the audience a connection to it. They owned it… temporarily. With BFT. And they found they didn’t like it when uninvited others, perhaps with the intent to shut down a show, infiltrated. Participating in Staging a Revolution could not be further from London’s more usual theatrical experiences, where buildings are commonly steeped in theatrical history with attendant rules, regulations, and etiquette. This first week of theatre was guerrilla style in a way that was surprising, the audience was included, and no one knew what to expect. 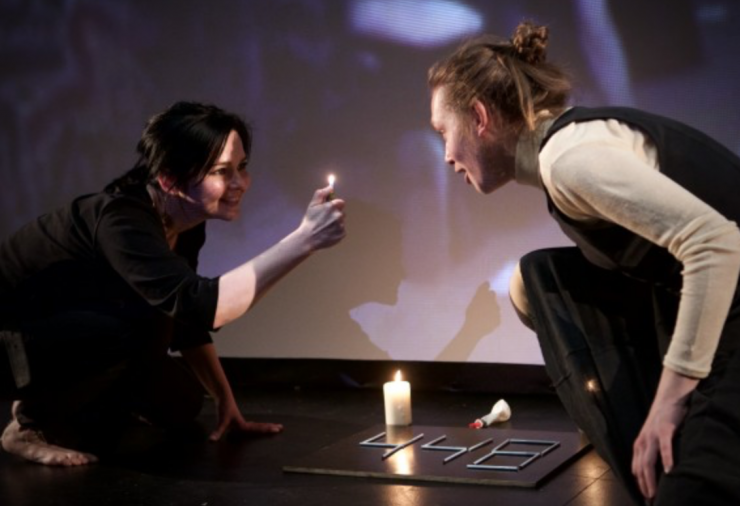 It also felt oppositional, cemented by the Met’s breach. The Young Vic’s Artistic Director David Lan said (recently echoed by the Labour leader Jeremy Corbyn) that “dissent is necessary to democracy, and democratic governments should have an interest in preserving sites in which that dissent can be expressed.” BFT seems to have taken that on board; plays were staged in spaces that inhibited or encouraged dissent or had been in its thrall. What better place to present Sarah Kane’s 4.48 Psychosis than in Clerkenwell House of Detention, a former Victorian prison, where children were cruelly locked up? The cell-like rooms, which the actors restlessly roamed, set one’s nerves at the very edge. Exploring its dark crypts brought one face to face with a pocket of history this audience member at least was unaware of, and instigated a rapid (re)appraisal of how we appropriate such spaces today—the former prison is now often used for luxury product launches.

The productions of Kathy Acker’s New York ‘79 and Minsk 2011: A Reply to Kathy Acker took place in the recently endangered but now saved Vauxhall Tavern, a historically iconic cultural hub for London’s LGBT community. Elephant and Castle’s old entertainment hall, the Coronet, due to close in 2017, a victim of the aggressive gentrification drive, was the stage for Price of Money. Audiences could not fail to make the link between the themes of the play—rabid capitalist greed or totalitarian sadism— and the fact that the space they were in was facing closure through these very same pressures.

But the informality of the first week did something else. Gone were the limitations of status and boundary. No one really knew who was a staff member, actor, or audience member and it didn’t matter. Front of house teams, in their civvies, were able to reach across the boundaries that any uniform, no matter how casual, instills. The uniqueness of constantly changing venues meant that imaginations were free, minds were not blinded by their familiarity with entrances and routes, performance etiquette and regulations. Constant spatial adjustments and exploration made the experience exhilarating for all. We were in it together, one felt, on the frontier of something not quite expressible.

In the second week, Belarus Free Theatre’s move to the Young Vic highlighted the need for at least two types of theatre-going experiences to rub up against each other. So far, plays in secret venues had been immediate, communal, and sometimes risky. But the three plays that closed the celebration, with their demands for greater technical abilities, were in need of more formal settings, hence the move to the Young Vic. Is this a failure? Is the allure of the bright lights and the giddy eclectic atmosphere that is the Young Vic, too strong? Hardly a failure. Every craftsman wishes for the best opportunities to hone their skills and submit to the demands of their art. And everyone, every now and again, wishes to come home and the Young Vic, outside of Belarus, is BFT’s home. 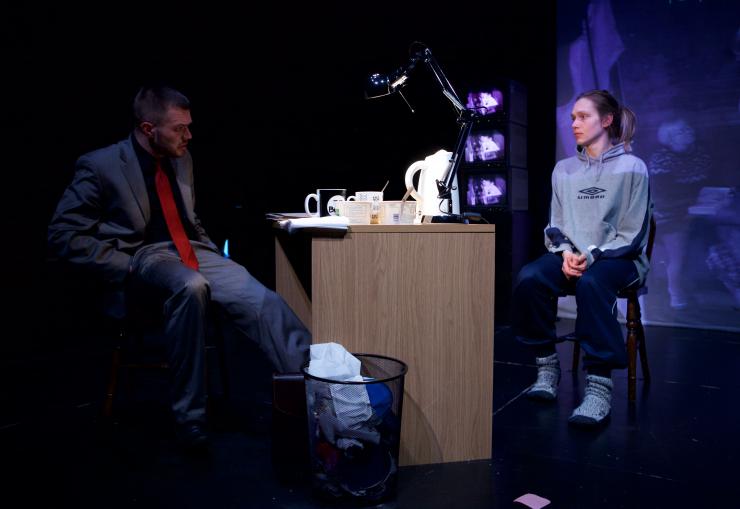 Kiryl Kanstantsinau as Colonel Orlov and Maryia Sazonava as Irina Khalip in Time of Women at the Young Vic. Photo by Nicolai Khalezin

But it did feel different. Firstly, the Young Vic was awash with audiences for other shows, and its bars were knee deep with locals and workers from the nearby college, shops, and offices. It felt like coming back into the real world, as if surfacing from a more narrow community into a place where everything opened out, and opportunities to connect with those outside theatre, abounded. In other words, it felt free.

But did it also make BFT’s sense of togetherness with their audiences slightly more fractured and did audiences feel as connected to space? Front of house teams were back in their familiar bright red T-shirts, friendly, welcoming, and informed, and directing everyone where to go. “Found” performance spaces, complete with their own histories and atmospheres, were replaced by the Young Vic’s technically advanced Maria studio. Announcements on a half-heard Tannoy above the excited din told me what to expect and where to go, whereas in the first week, audiences had intuitively found and gathered around the performance space as if it were a campfire. At the Young Vic, I had no need of navigational or exploration skills. Everything, in a visceral sense at least, felt safe after the experience of the week before. For those not used to conditions in a dictatorship, the excitement garnered from the energy of the first seven days perhaps evaporated a little. But, wasn’t this the point? Surely my initial slight skepticism of the move from the secret locations to a safer venue, was a result of arrogance derived from having lived in a country that has never suffered the trauma of an occupation during my lifetime and is far from the fear of a marauding dictatorship? I can’t know what it is like to experience real freedom because I have had no real experience that is comparable with its lack.

"Belarus Free Theatre has shown how their chosen theatrical language—surprise, connection with space, and post show discussion—can flourish and develop in its own way within a democracy by challenging how we approach, see, interpret, react to, and make use of theatre and its overspill into real life."

But actually, BFT was doing far more than just giving us a taste of creative unfreedom and then its opposite. Perhaps unintentionally, they have shown how their chosen theatrical language—surprise, connection with space, and post show discussion—can flourish and develop in its own way within a democracy by challenging how we approach, see, interpret, react to, and make use of theatre and its overspill into real life.

In the end, I can only conclude that I want both styles of theatre, both styles of venues. I want the crazy guerrilla dissent of BFT, appropriating risky spaces like urban explorers in the middle of the night, taking their audiences with them. In fact, I want more. I want to turn up with everyone else, to a previously uninhabited and perhaps prohibited space, with lights, scenery, props and all, to put on a show. It would be unannounced, unregulated place-hacking theatre. But I also want the opposite of that. Somewhere to go back to, when I wish to see theatre in more familiar settings and or when I feel the need for a sense of home and place. I want my theatre to be within a settler community and to be nomadic. And I am sure Belarus Free Theatre does too. The longing to perform freely in their own country, without endangering their audiences, must be, for BFT, deep and long lasting. But, perhaps and contrarily, so is the need to place hack. Hence, Staging a Revolution’s wonderful contradiction.