“I think the act of sitting and listening, whilst looking into the eyes of a stranger is something that rarely happens in life” writes David Jubb in answer to my question about the pluses and minuses of asking members of the public to narrate their personal fables to an audience of strangers. We are talking about London Stories, a Battersea Arts Centre project where story tellers, all immigrants or refugees, tell the tale of how they came to make London their home.

The experience is simple. Audience members gather in BAC’s foyer and, by way of the coloured wristband they are given, are split up from any friends and family and put in a small group of strangers under the banner of a London Borough. The move is meant to introduce everyone to people they do not know, but it is impossible not to think that it reflects the mechanisms of refugee or concentration camps where people are regularly and arbitrarily split from loved ones, perhaps forever. Once this is done, groups are led to various rooms in BAC to hear six stories (there are twenty-nine storytellers in all) and then encouraged at the end of the evening to come back the next day to hear more.

First up for my group is Marcelo from Chile, who has lived in London for 12 years. When we enter BAC’s small, sparse, but warm room he is staring pensively out of the window, but when he turns around and sees us he beams, albeit a little nervously. The nerves though, the sometimes slight hesitancy from many of the storytellers, is a winning factor in many of the performances, reminding us the stories are true and the tellers are human. There’s no slickness in Marcelo’s narration either. It is the day after Donald Trump’s election and Marcelo makes no apologies for going slightly off book and talking about the mood in New York when George W Bush was elected and what it was like to watch the twin towers fall from downtown Manhattan. Marcelo discussses the fear and protest then, one can only wonder what the fear and protest must be like now. Marcelo’s story is peppered with individual thoughts and observations: “New York is like a grid”, he tells me later, reflecting on how the architectural lay out of London, mostly unchanged for centuries, makes it feel a freer place than NYC. “Political times have ways of redefining you” he says a little ruefully, but acutely. 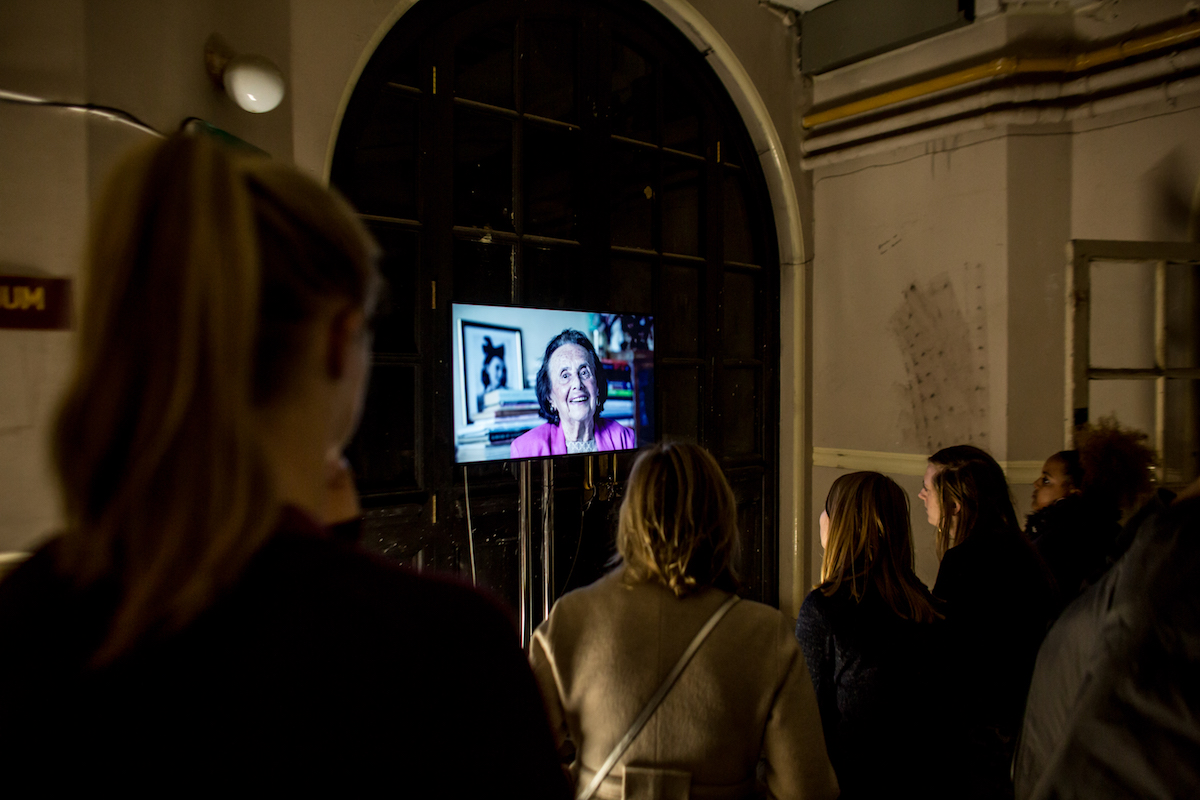 Marcelo’s story, like that of Rabiah’s, is internal. Rabiah, whose father moved from Pakistan administrated Kashmir when he was 24, has chosen a room with more furniture and objects in it. It is almost unbearably warm as she sits and tells us anecdotes about her grandfather’s tendency to hoard things back in Kashmir. But then she relates a more violent episode and one feels that the story has moved from the plane of the internal to the more political and social and back again. It is the same for Jade, from Uganda, who sits in a cold high ceiling room on the ground floor. At first, she lulls us in with her warm personality and precise verbal delivery talking about food: food in Peckham and food in Uganda. Amazingly we are taken from the present day back to the time of Idi Amin Dada, “the conqueror of the British Empire” by way of a Maccy D’s. As the evening plays itself out, it becomes apparent that it is not just the stories that are being told that is important, but the telling and the expressions on the faces of those doing the telling.

For example, Maryam is a young Iranian woman who moved to London in 2002 and who feels conflicted over her Iranian and British identity. But her face speaks of love, warmth and adventure. With Lily, whom we only see on a TV screen in a pre recorded and edited video and who is a Holocaust survivor, it is the hands that are important and that tell so much. Eiad, who came to London from Damascus two years ago via a small boat and lorry, exudes wit, confidence and dancing eyes. From all of these storytellers one not only learns about sorrow and hardship, but how to survive such experiences too.

The experience of people being able to own their stories by the act of relating them, ten times a night, de objectifies the storyteller/ performer. The audience too cannot escape and they are forced to confront and accept head on without denial whatever emotion the teller may be experiencing and whatever it may arouse in themselves. The buffer that is normally illusion is not there and audience members and performers alike have no safety net. Despite this, the storytellers report that they are “able to redefine themselves” as Marcelo says. Eiad tells me that by repeating the process of storytelling every night it helps him “recall more things.” What this does is enable the storytellers to work themselves out, or as Eiad said understand “what it is that affects us” which might not necessarily be the things that one expects. But to think that this is some sort of therapy night would be to misunderstand BAC’s intentions. Posters and front pages from old tabloids adorn BAC’s corridors and they not only provide context, but make for sobering reading as well. 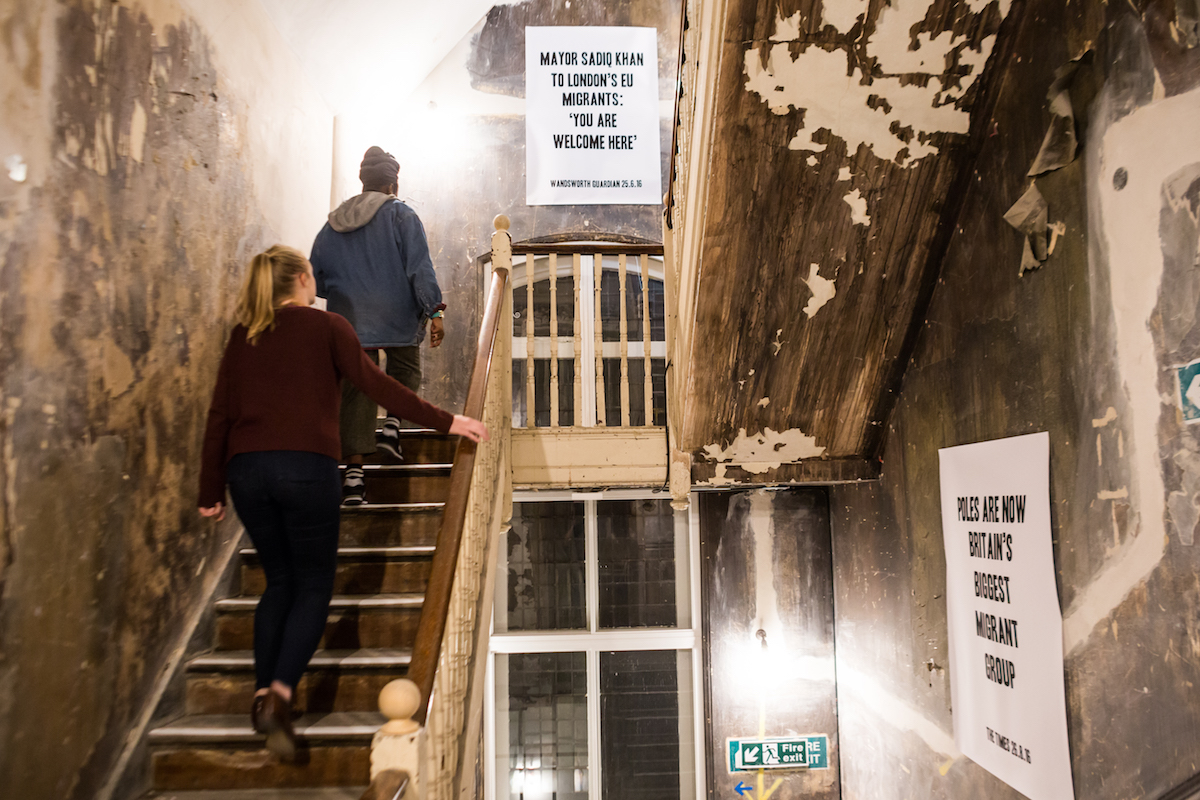 London Stories Made By Migrants / photo by Joyce Nicholls

BAC flagged this particular night as a press night, encouraging the event to be seen as being part of the broad theatrical arena. “There’s something incredibly simple about London Stories that I hope helps us rethink simple ways for communities to be at the heart of live performances and that also reminds us how simple and accessible live theatre can be for everyone to engage with, whether as audience or storyteller” says Jubb. The experience is very different from what the public may expect of theatre though and it asks the audience to leave any preconceptions, any hang ups, with the umbrella they may have left in the cloakroom. The performers weren’t directed as Jubb wanted them “to feel authentic in their relationship to their story, so audiences always experience a true relationship between the storyteller and their own story, rather than a mediated or controlled one.” Experiencing the relationship the storyteller has to their own story gives audience members a shifting viewpoint that is psychological, internal, social and political. Sometimes the storytellers might contradict themselves, go back on themselves, but this is the very thing that drama is made up of, allowing for different points of view, allowing for illusion and disillusion to occupy the same space. The experience of those performing the stories and of watching and listening to them might be summed up like this: “Don’t take it too seriously. Hold on tightly, let go lightly.” And this is from Peter Brook’s The Shifting Point.

***
London Stories is until 26th November at Battersea Arts Centre.