Bodies in Pain, Protest and Resistance

No matter what the laws of physics decree, there is untold and explosive energy in resistance. Or such is the evidence of “Burning Doors,” the Belarus Free Theater’s bruising exploration of the dynamics of resistance — the kind that occurs in the intersection of art and politics — at La MaMa.

This galvanizing production, which runs through Oct. 22, finds a host of able-bodied young women and men subjecting themselves to, and transcending, a spectrum of trials and tortures. These include being wrestled repeatedly to the ground, interrogated in a circular infinity of verbal assaults, harnessed to bungee cords while running desperately in place, strung high in nooses and dunked again and again in a bathtub, while trying to recite a poem. 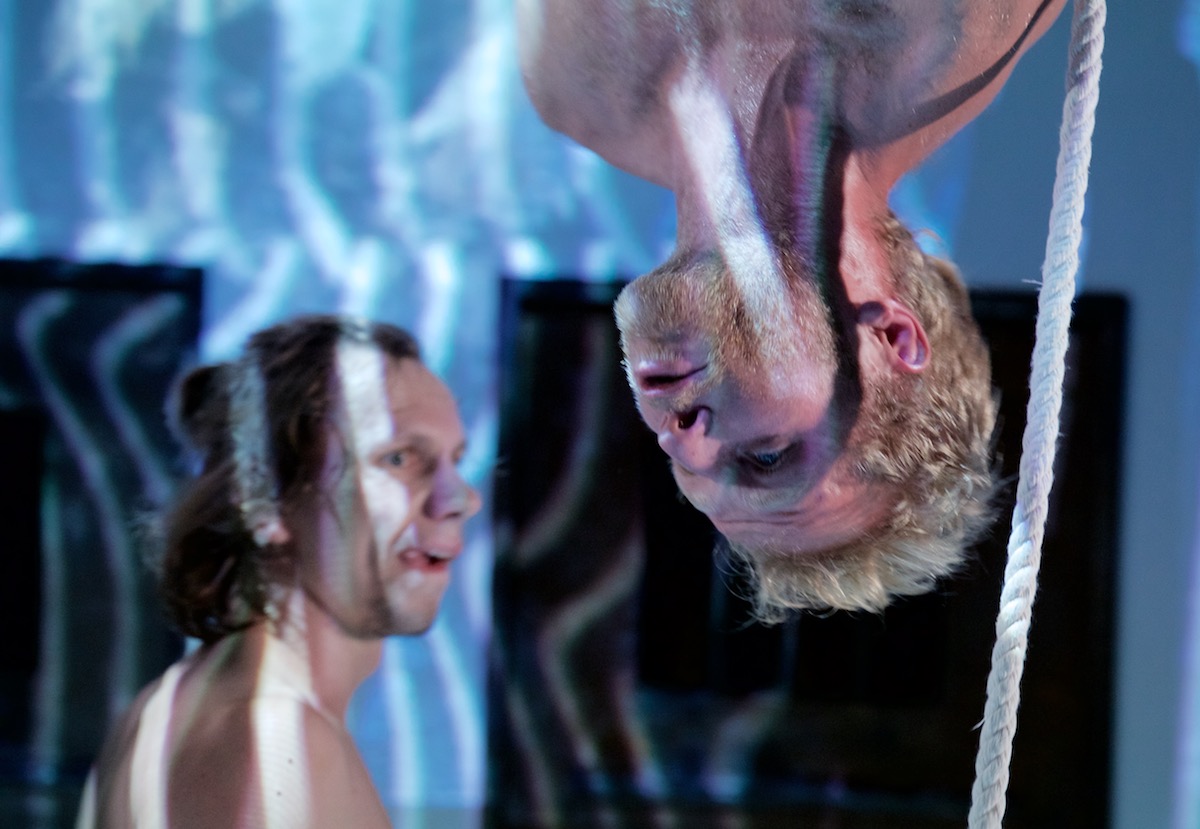 The woman in the bathtub knows whereof she speaks, or gasps. She’s Maria Alyokhina, a member of the Russian punk group Pussy Riot who made international headlines when they were imprisoned for staging an anti-Putin performance (of 40 seconds’ duration) in a Moscow cathedral.

Then again, it seems safe to say that most members of the Belarus troupe, which is banned from performing in its native country, have firsthand knowledge of the repression they’re re-enacting and responding to onstage. (Program biographies include references to arrests and prison terms.)

Only blocks away from La MaMa, at New York University’s Skirball Center, another set of visitors from abroad are channeling recent history into confrontational drama. There’ll you find the Freedom Theater, a storied West Bank-based company that describes itself in the program as “a platform for cultural resistance.”

The troupe’s current production, which has met with protests in other parts of the world, is “The Siege,” a speculative re-enactment of the 39-day event of the title, when Palestinian militants took refuge from the Israeli Army in 2002 in Bethlehem’s Church of the Nativity, built in the fourth century and a longtime destination for religious pilgrimages.

Created and directed by Nabil Al-Raee and Zoe Lafferty, this study of soldiers waiting out the standoff with diminishing supplies and stamina takes a more naturalistic and overtly didactic approach than “Burning Doors.” The characters here include a scene-bridging tour guide, who reminds us of the sacredness of the setting — summoned in crepuscular stateliness by Andy Purves (lighting) and Anna Gisle (set).

But most of the play is devoted to conversation among six soldiers, who debate the existential toll of resistance and the historical value of martyrdom in dialogue that emphasizes exposition and theme over individual character. Despite the intrinsic suspense of the setup and the likability of the performers, “The Siege” often registers as sincere but static, like an animated chapter from a partisan history book.

The astonishment of “Burning Doors” — conceived and staged by the troupe founders and artistic directors (in exile), Nikolai Khalezin and Natalia Koliada — is its ability to translate political rage and impotence into an art of indirection that is often as complex as it is powerful. This is no trumpeting call to arms, or not only that, but an open-ended portrait of both the sociology and psychology of the artist as rebel in Eastern Europe. 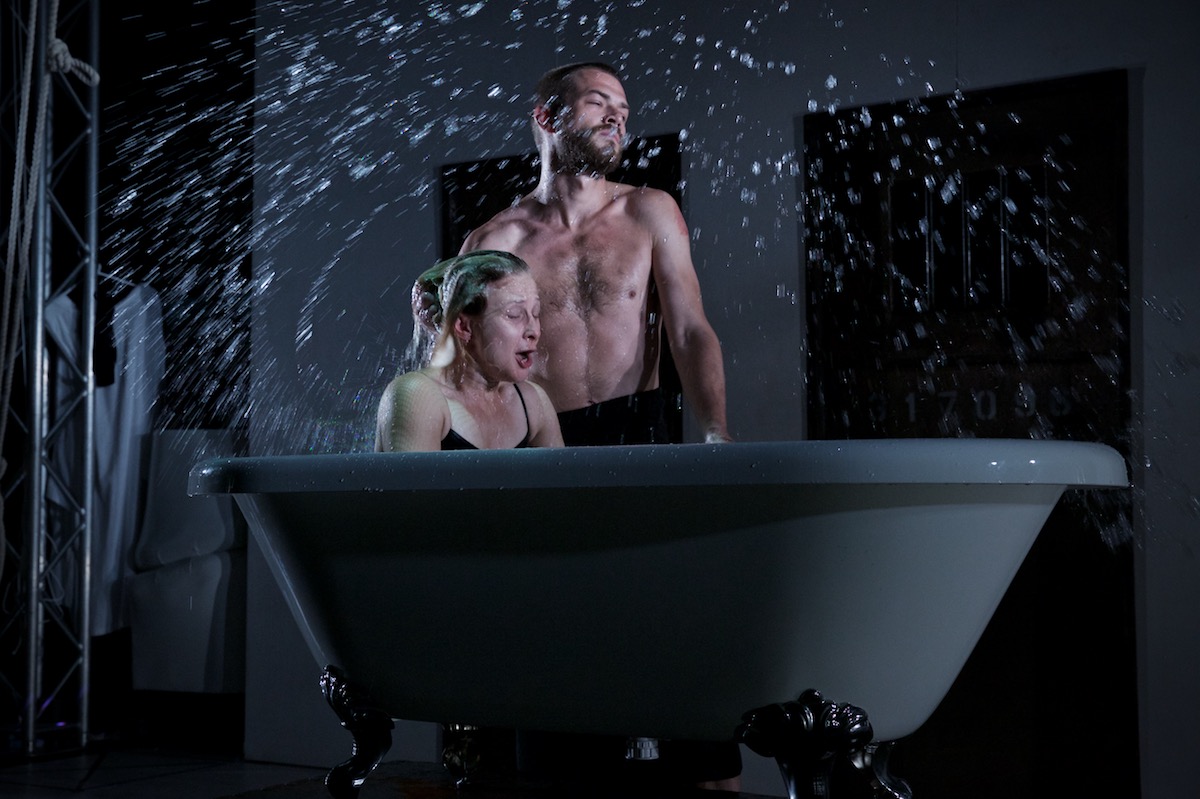 At the production’s center are three specific artists of the 21st century: Ms. Alyokhina of Pussy Riot; the Russian political performance artist Petr Pavlensky, whose widely reported acts of civil disobedience have included nailing his scrotum to Red Square; and the Ukranian filmmaker Oleg Sentsov, who is in jail in Russia for alleged acts of terrorism.

Ms. Alyokhina — whose book “Riot Days,” published in English this year, is in part a memoir of incarceration — is here to testify on her own behalf. She becomes a participant in the ensemble’s impressionistic re-creations of an outcast childhood, a brutalizing stint in prison (in which cavity searches were common events) and the bewildering early days of freedom.

She even appears in a drolly self-conscious question-and-answer session, in English, with the audience. (The questions on the night I saw the show included, “What do we do about Trump?” Her answer, delivered tentatively and almost shyly: “I would resist. But it’s you, not me,” who must make the decision.)

The words of Mr. Pavlensky and Mr. Sentsov, who have been highly articulate in state psychiatric exams and court statements and testimony, are spoken — and projected — here as well. (Most of the performance is in Russian and Belarusian, with English supertitles.)

As for the opposition, it is given comic voice by two actors, embodying Russian fat cat apparatchiks (Pavel Haradnitski and Andrei Urazau), who discuss how to deal with the incomprehensible behavior of subversive artists while sitting, face to face, on toilets. (That scene has a triumphant visual punch line, involving women dressed in signature Pussy Riot balaclavas, wielding flashlights and rolls of toilet paper.)

The production also summons the lyricism under duress of the French poet Paul Éluard (whose “Liberty,” a totemic work for the French Resistance during World War II, is recited by Maryia Sazonava in a noose and harness, suspended agonizingly above the stage); and the ruminations of Michel Foucault (delivered by Maryna Yurevich as a circus ringmaster-cum-judge) on subjugation and punishment.

The twisted human forms of the art of Egon Schiele are conjured in haunting ballets of what might be called defensive masochism. The performers coil their bodies increasingly inward, as if to squeeze their own flesh into invisibility.

The punishment of one’s own flesh is notoriously the specialty of Mr. Pavlensky, whose performance pieces of protest include — in addition to the scrotum nailing — setting fire to the doors of the Russian Federal Security Service building, sewing his lips together and wrapping his body in barbed wire.

“Burning Doors,” which has been designed as a sort of prison cell of the mind by Mr. Khalezin, makes the subliminal case that such painful activities are of a piece with a longstanding, specifically Russian sensibility. In the 19th century, Dostoyevsky wrote about the phenomenon of self-laceration, as both a physical and spiritual form of torment, a naturally unnatural response to the divisive absurdities of self and society.

Two of this production’s most haunting vignettes are set to Dostoyevsky’s words. A naked performer slowly dresses himself while reciting Prince Myshkin’s account from “The Idiot” of a man awaiting his execution, counting down what he believes to be the final moments of his life.

The actor here, Kyril Masheka, is steeped in a raw, empathic fear and sorrow that make putting on clothes a fraught and irrelevant-seeming business. And in a scene from “The Brothers Karamazov,” a dialectic debate on viciousness and goodness between Ivan and Alyosha (Mr. Haradnitski and Mr. Urazau) becomes a furniture-upending wrestling match.

Philosophical issues of immortal import assume a mortal — and moral — urgency. And Dostoyevsky’s questions about persisting, and resisting, in the face of institutionalized inhumanity glow with an infectious fever.

The show’s visual epilogue is (literally) writ in flame, but the bonfire that lights up “Burning Doors” is from the friction of artists as arsonists — in motion, at war and determined to scorch.