'King Lear,' via Belarus, rages and storms at Chicago Shakespeare

If a King Lear could still be said to exist anywhere in the world, then Alexander Lukashenko, the president of the Republic of Belarus, is about as close a candidate as you could find. In office for more than two decades, the monarchical dictator of the outlying Eastern European nation holds all the effective reins of governmental power, including near-total control of spending, the ability to dissolve an uncooperative parliament and a stranglehold on the judiciary.

The Lukashenko record on human rights and artistic freedom is less than stellar, and the Belarus Free Theatre, now back in Chicago as part of Chicago Shakespeare Theater's "Shakespeare 400" festival, has been his consistent, truth-telling Fool. They're not exactly "all licensed" (far from it, actually), but infinitely courageous and always sharper than a servant's tooth. 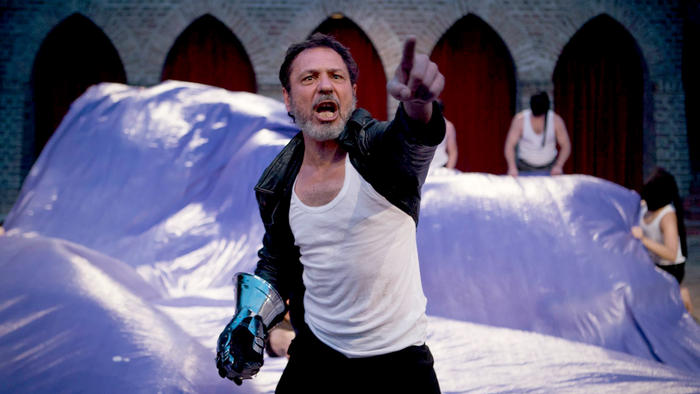 If you've seen these Belarusians before, you'll already know they are the real deal: artists who have paid such a steep personal price to pursue their calling that high dramatic stakes come with preternatural ease. So, too, does ferocious satire — which, you might be surprised to read, is a crucial part of their stunning "King Lear," now in its U.S. premiere on Navy Pier under the direction of Vladimir Shcherban.

I felt totally flattened by some of the ideas in this show, which struck me as a wildly irreverent take on the play by those who despise the way it pleads for sympathy for the meandering dotage of a mercurial despot who treats his country like personal property. It could not be more different from the 2014 Barbara Gaines/Larry Yando "Lear" (wherein Lear was seen as sufferer of dementia), but it often recalls Robert Falls' 2006 Goodman Theatre "Lear," which also viewed the old man with the unpleasant daughters as an Eastern European despot who bred what he deserves.

The Falls Lear was a spectacle. The Belarus Lear is, by design, a tawdry affair with almost no scenery at all — a nondeficit that does not stop the Belarusians from creating the most enveloping storm scene I've ever seen; its ingredients are a tarp, a vocal dirge, a few drips of water and ferocity of energy. It will blow you away, as it does Lear himself.

In another moment so visceral you're thrown back in your seat, the character of Edgar (Siarhei Kvachonak), stripped bare, covers himself in his own excrement, achieving a level of debasement that the text surely demands but that few productions achieve. Even Cordelia (Victoria Biran), the good daughter of Lear's trio, is hardly removed from this nasty crew — her refusal to play her sister's games of flattery seem mostly an expedient choice. In Scene 1, we see her making out furiously with the Duke of Burgundy, her preferred lover, only to make a dumb mistake and thus get fobbed off on the king of France, a man who in this production is even older than her father. Cordelia's death surely is a relief to Cordelia.

Elias Faingersh's Fool, meanwhile, is a trombonist, a twisted Mardi Gras-like frolicker whose presence only emphasizes the tackiness of his master. Dzianis TaraSenka's Kent plays the accordion.

Lear himself (he's played by Aleh Sidorchyk) is energetic, far from ancient and felled not so much by the decline in his own powers but the maneuvering of his daughters, chips off the not-so-old block. Even when his offspring has dad on the run, Lear hardly changes his spots: When he petitions Goneril and Regan for his retinue, he shoves a black glove in the faces of his daughters, again and again.

This is a tragic hero for whom you feel little empathy, which surely extracts its price. No question. You're inclined to wish he would rot out there on the heath.

But I found myself enthralled by this take, or takedown, overwhelmed by the force of its determination to show that nothing ever comes of a dictatorial nothing, and its revelation of how characters like the ancient Gloucester (Pavel Radak-Haradnitski) get caught up in a powerful family's squabbles. This is a "Lear" that constantly strips away artifice, revealing all the tacky jiggles and flops of nudity and the doomed flailing around of those caught in the grip of a man who answers to no one but himself. Men like Lear are all the more dangerous when their powers are threatened. These actors have a real-life sense of that particular truth.

This Shakespeare 400 thing is really going well, forsooth. The Russians were just here with a four-star "Measure for Measure," now followed by the Belarusians with this not-to-be-missed "King Lear" that feels like a great howl of rage suffused with mortality and absurdity. I speak not of the man out in the rain, but of the bigger storm he keeps raining down on everyone else.