The individual hells in Escaped Alone at the Royal Court

This is a play that showcases Caryl Churchill’s instinct for comedy and close observation of characters whose personal turmoils and tragedies are never quite out of their lives, like dark shadows that interrupt the gentle sunlight. It also parallels the playwright’s love for ironic, genre-busting dramatic sabotage, here being in the form of an apocalyptic nightmare.

It all starts pleasantly enough in a Mike Leigh Another Year kind of way, with servile Mrs Jarrett gate crashing a garden tea party of elderly women whom she knows only slightly. The tall wooden door through which she peers, though, is itself a warning or a question. Into what kind of universe is slightly Aesopic Mrs Jarrett blindly stepping? A walled, protected sacred kingdom where the ladies can swap tales safely away from the rest of the world? It is certainly idyllic, with very green grass, an impossibly blue sky, tea and gentle chatter that not even the buzz of the outside world, relayed by Christoper Shutt’s naturalistic sound, can disturb. 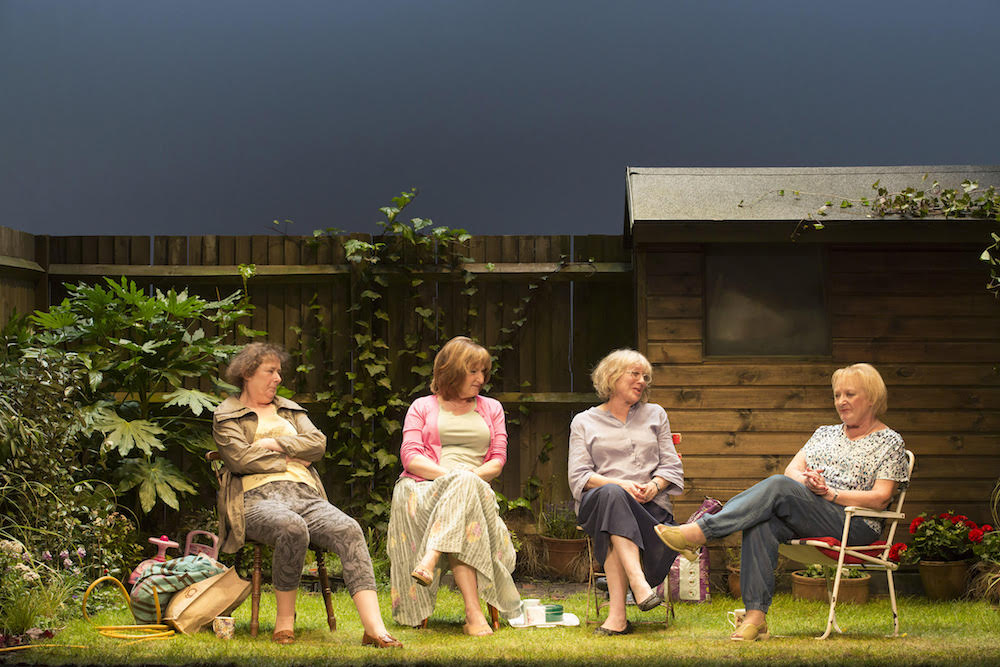 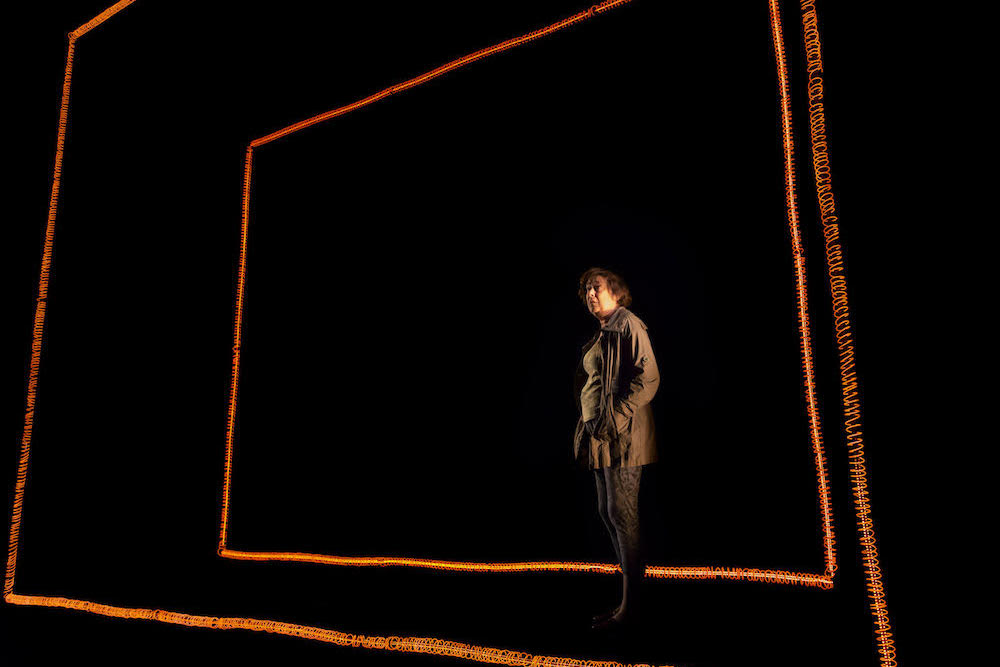 Things are soon disturbed, though, prompted by Miriam Buether’s incredible chocolate box set design. This walled kingdom is not entirely right and has us on edge right from the beginning. Look at it for long enough and it is like looking at the four women and the garden through a stereoscopic 3-D view-master. It is too real, it feels so isolated that it may be spinning on its own axis helplessly in the tempestuousness of several global storms, or we fear that it will topple off the edge of the earth and into its own alternate universe, a little like Mrs Jarrett, who, in the breaks that intervene between the ladies’ conversations, steps into an apocalyptic world to directly address the audience.

This forces the audience to question (if it can be answered): which world is the more real? The one inhabited by the four women as they chatter and let out their personal anguishes in prolonged monologues or the dark chasmic deranged world of Mrs Jarrett? As she describes an apocalyptic future she stands within two frames of coiled buzzing orange: has she come from that future, is it now already? Where “property developers develop the wind” “mushrooms are exchanged for urine” and where “400,00” tonnes of rubble fall on children’s heads at the command of “business executives”? At the back of Buether’s stage, we can just see the other ladies ashified, as if caught in an environmental disaster of Pompeii proportions.

The opposing worlds jostle for space and for our attention. Both are ones we instantly recognise. The tea party revolves around the friends’ private problems which interrupt and preoccupy their discussions, and as if using a camera, director James Macdonald homes the spotlight in on every one of them for their troubled monologues whilst the others fade into sepia still images. Each has their equal turn, June Watson, Deborah Findlay and Kika Markham each elucidate their particular terrors (which may or may not go with age) so that we are chilled to the bone. But Mrs Jarrett’s subverted apocalyptic world is exactly what we understand too. As Churchill mocks and makes fun of her own need to respond to present global humanitarian and environmental crises with surrealist humour and wordplay, we laugh at the idea of flood museums, buildings migrating between cities, rubber ducks floating on the stock market and cities abandoned to sick foxes. We can laugh the laugh of the unconcerned, laugh the laugh that surely the other ladies would if they knew, who for now, are secure in their walled, little kingdom. But Linda Bassett’s delivery is so dry, so wry, so full of authority, it is as if Mrs Jarrett knows that this will all come to pass, or that it has and Mrs Jarrett has “escaped alone to tell thee” as happens in Job and from which derives the title of the play. Might the other three women be dead? Or is all that Mrs Jarrett spouts, in her head? Is this her kingdom of terror? We can be reminded of a play by another deeply politically committed writer, Harold Pinter, who's Ashes to Ashes describes a woman drowning in all of the world’s human rights abuses, all its tyrannies and killings because she cannot endure them. When it is Mrs Jarrett’s turn to have her monologue in the garden, all she can utter is “terrible rage.” Let your ears go as it repeats and it becomes “terror of age. ”

Churchill’s presentation of older female individual hells invites us to compare and contrast. Whose hell is worse? Is it acceptable to only care about our own problems or is it possible to struggle with private horrors as well as the universal ones at the same time? Yet Linda Bassett’s Mrs Jarrett is light on her feet, energetic, contrasting with the more sedentary others. Is it because telling her story has allowed her relief? Why are women always portrayed as the conscience bearers? Churchill never answers our questions, and in this deeply conflicting and complicated play, it is up to us to decide.

Escaped Alone continues at the Royal Court until 12th March