The body. Or, rather, our bodies.

There’s always a lot of them and a lot about them in Belarus Free Theatre’s work, they are the modes by which the company has particularly chosen to express beauty and ugliness, humour and tragedy, life and death. But, in Trash Cuisine, the company goes even further by using the body- our idea of it, how it functions and its needs- to explore state executions and legalised killings the world over. 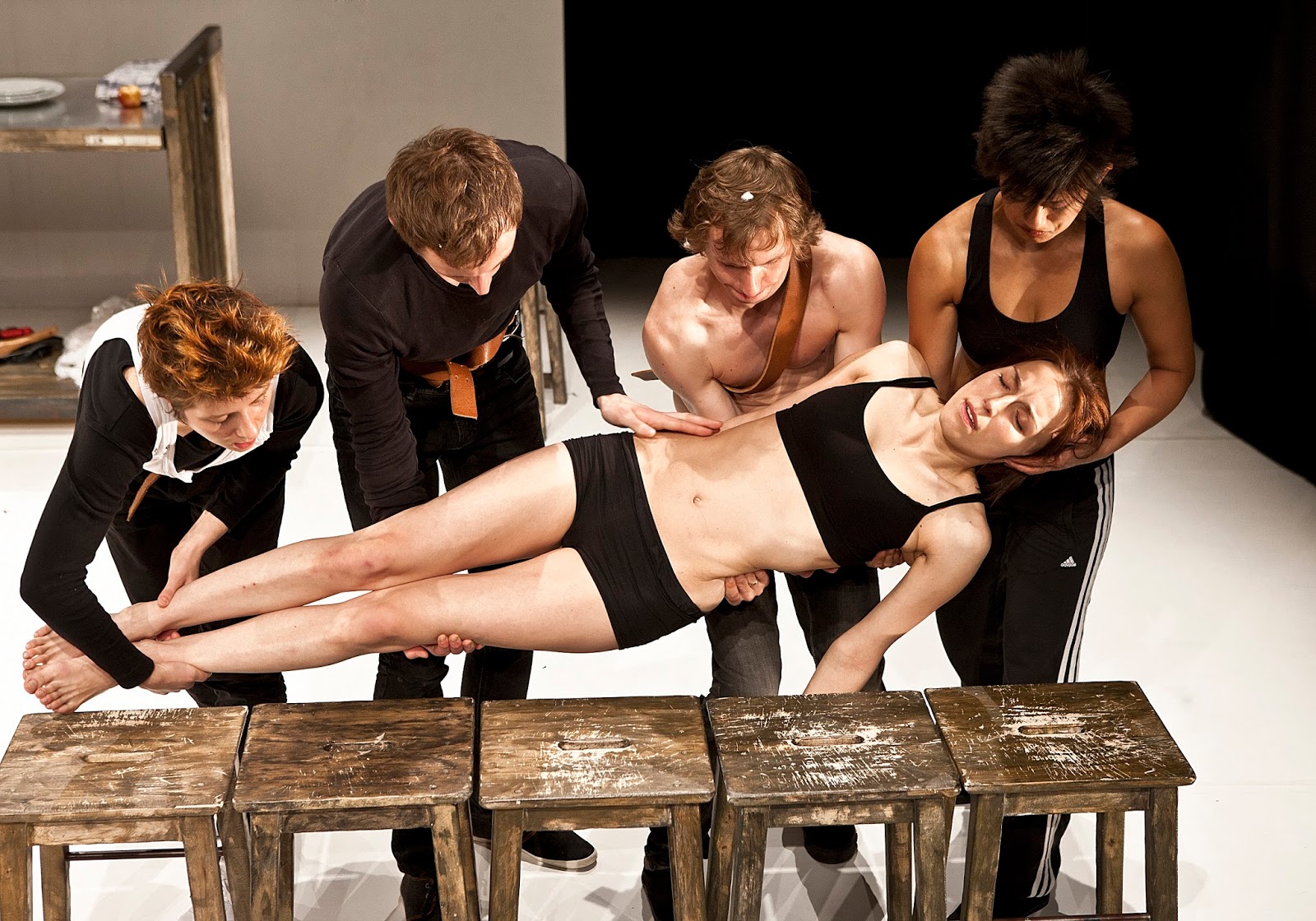 On the face of it, the show seems relatively simple. We have a series of vignettes detailing horrendous global executions. The true story of a Hutu husband murdering his three small children and sewing their cooked remains into the belly of his Tutsi wife during the Rwandan genocide, is the worst (if there can be a worst). To offset such callous atrocities created by civil war and death by the chair or injection as sanctioned by states in the US and Belarus, or water boarding used by the British Army in Northern Ireland (which we see on stage) we witness two female executioners, who, via Shakespearean sung verse, swap anecdotes about their culturally differing execution methods (Thailand is trying to be more humane, for example) whilst gorging themselves on strawberries, cream and champagne.

It might seem that these little episodic narratives, written by Nicolai Khalezin and Natalia Kaliada and directed by Nicolai Khalezin, are haphazard, and they might be, even with British Attorney and founder of Reprieve Clive Stafford Smith’s recorded statement at the end, where he relates witnessing the execution of a client on death row, if it weren’t for the company’s overall schematic design- clever, visceral and punchy- which comes in the form of french actor Philippe Spall, who, as if on a Masterchef series, guides and cooks us through some cuisine delicacies whilst all this horror is taking place. 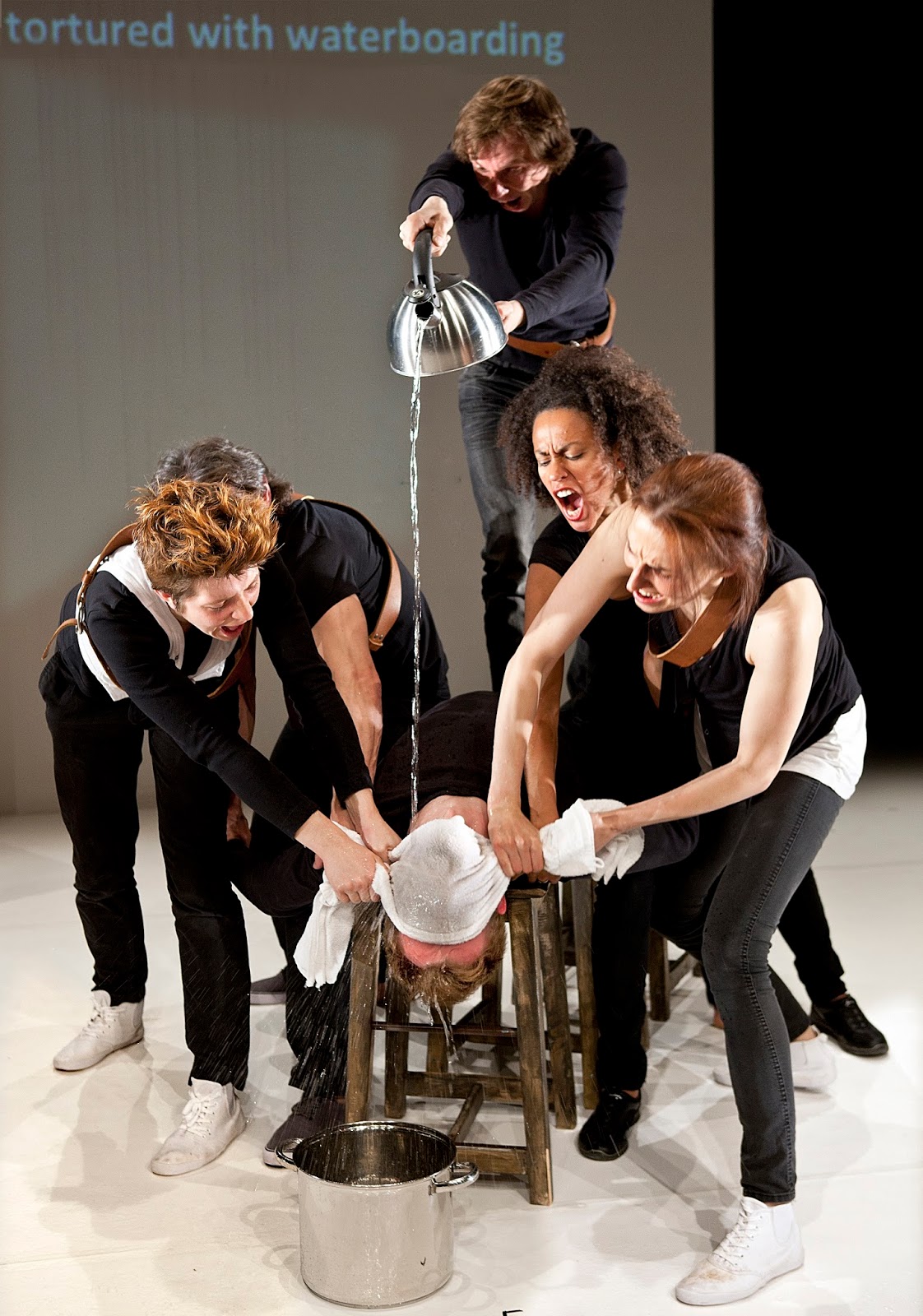 The result is to parallel our preoccupation with food- here, mostly meat eating and bone crunching, alongside humanity’s fascination, as either observers or perpetrators, with premeditated drawn out death and the spectacle it creates. It is worth considering the link- is there perhaps a deliberate connection between cooking, meat eating and violence for example? Or, perhaps more pertinently, the idea that once something is dead or is dying, including a somebody, that the physical entity of that thing, be it person or animal, is now public property, a spectacle to beheld by just about anyone, for whatever reason. After all, it is not so long ago that people paid to go and gawp at the mentally ill in asylums, or rented telescopes to stare at heads speared on spikes. Slightly nearer to us in history, prisoners at Buchenwald camp were garrotted by SS Guards and hung on meat hooks. Even closer to home, we have ISIL who indulge themselves in medieval traditions that they are bringing “wholesale into the present day.”

It is useful to say that Belarus Free Theatre are highlighting the injustice and horror of capital punishment and torture that is either state or not state sanctioned around the world, it is also useful to say that they flag up the suffering caused by such methods, and also, the common errors made, especially in the US, where innocent people are wrongly accused of crimes and killed. But it is also useful to consider that BFT is trying to understand why. Where do some cultures or some people get this desire to inflict such horror on another person?

It may be simplistic, but surely it has to be considered that it has to have something to do with the visceral manner within which we attend to bodily needs like eating, without really considering what we are eating or the manner in which we eat and how we treat and prepare it. Philippe Spall’s description of how a tiny European songbird, the Ortolan, must be prepared and then consumed- which includes similar modes of torture to those we practise on humans- should be taken into account. It is not the connection of meat eating here though that BFT are highlighting, rather the subjugation, abuse and ownership over something considered to be (by man) inferior and then man’s consumption and digestion of this particular thing, the supreme form his superiority can take. The events at Buchenwald, not in the show here, remarkably parallel the way in which we kill animals for meat.
Trash Cuisine is a horrific show, which does not turn away from the truth. Even when the light of atrocities shines so hot and bright, it seems to be trying to reveal the hidden curiosity, gore and need to be violent that hides behind such awful cruel life negating acts. It is a remarkable, unflinching moral tract for the abolition of capital punishment, state execution and torture everywhere and should be seen.