Concert for Stolen Land July 23 Brest Transit. Part 1 June 12 River Theatre, the Flying Dutchman of Belarusian rivers May 09 Ales Dzianisau: “I am an enemy of the state” May 07 Filmmaker Aleksandra Butor: I hate superficial approach to work May 01
END_OF_DOCUMENT_TOKEN_TO_BE_REPLACED

Aisha fled from her native Liberia in the early 1990s, when the country's civil war began. Her parents were killed in front of her. The then ten-year old girl's father and mother's hands were cut off first, then their arms up to their elbows, then up to their shoulders, and finally they were beheaded.

Aisha fled to neighboring Cote d'Ivoire. Staying with relatives, and despite the difficult political situation in which the country found itself at the turn of the century, she was able to live there and even got an education. Upon reaching adulthood, she got married, and moved to her husband's house. By 2010, when the presidential election triggered acute political crisis in the country, Aisha already had four children. Another military confrontation between Ivorian groups supporting two candidates for presidency, brought further grief into Aisha's family - her husband was killed and she was wounded in the arm and back.

She could not stay in the country, but gathered the children and they started their way towards Morocco, through Algeria and Mali. Many were trying to use this route to reach European shores; refugees from Nigeria, Cameroon, Sierra Leone, Gambia, and Congo. We met representatives of all these countries in a secret apartment in Tangier, in a squat filled with refugees waiting for their opportunity to get into Europe.

The most difficult segment of Aisha's journey was crossing the desert. Twenty-six days with a minimal supply of food and water; with four children, two of whom she had to periodically carry in her arms. When the family arrived at Rabat, Moroccan authorities placed the family in a refugee camp. Accustomed to the reality, Aisha began to wonder about how to proceed, but fate again decided all for her, forcing to survive - two months later she was informed that she should leave the camp with the children. The motivation was simple: the large influx of refugees. By this point, Aisha had five children.

There was no escape, and Aisha, on the advice of knowledgeable people went into the forest. Many refugees lived in the forest - those who could not find refuge in the city or the official camp. Scattered through the forest, thousands of people, many of whom were sick or injured: without medical care, occasionally finding food. They only wanted one thing - to be in a country where they could find a permanent shelter. 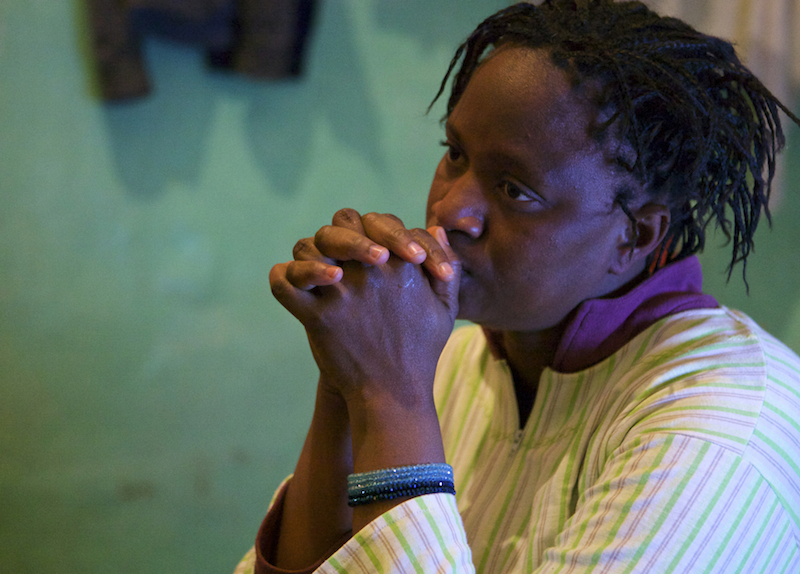 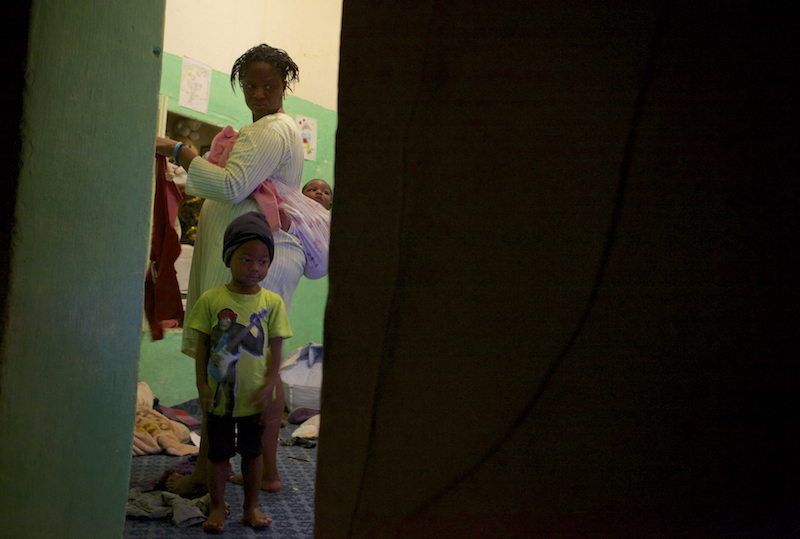 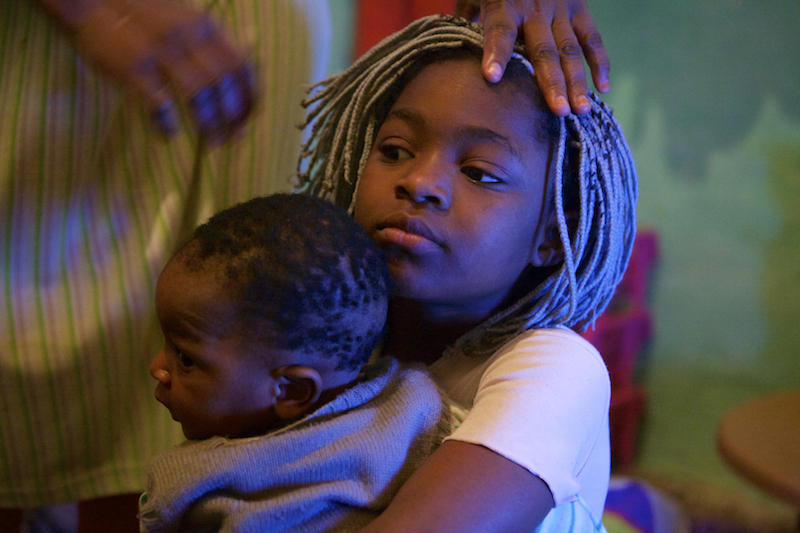 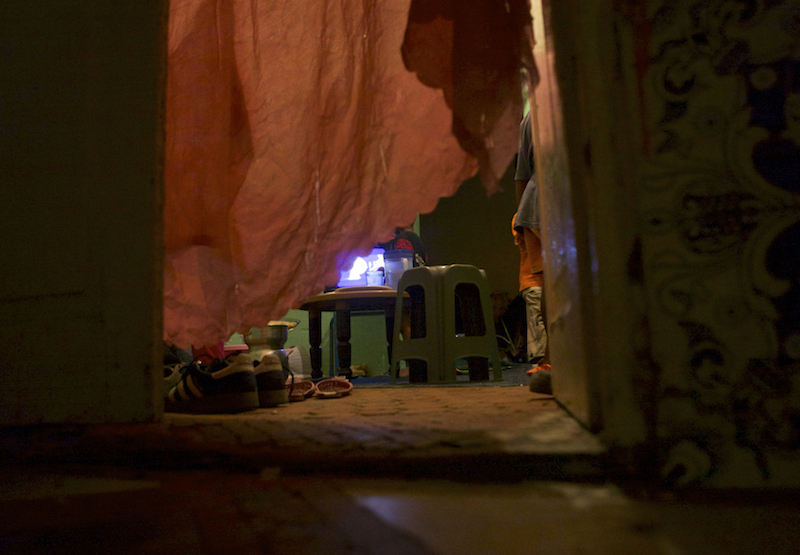 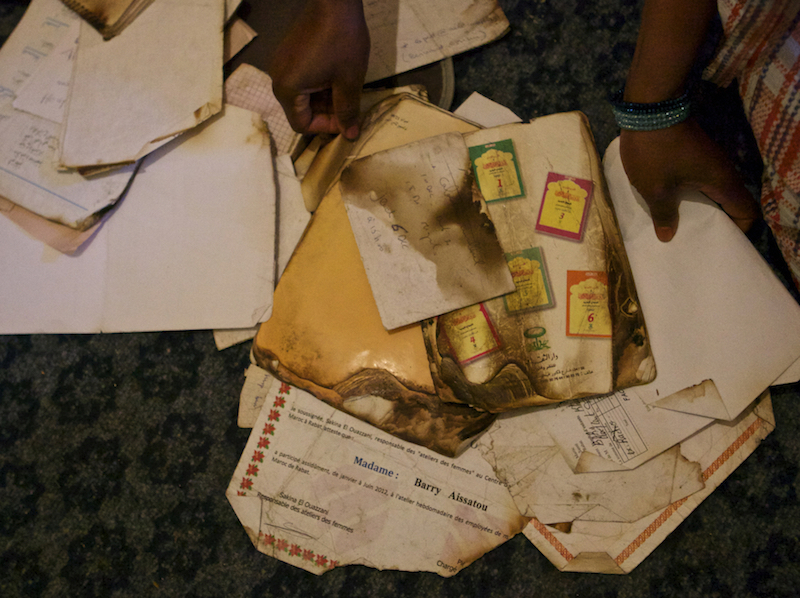 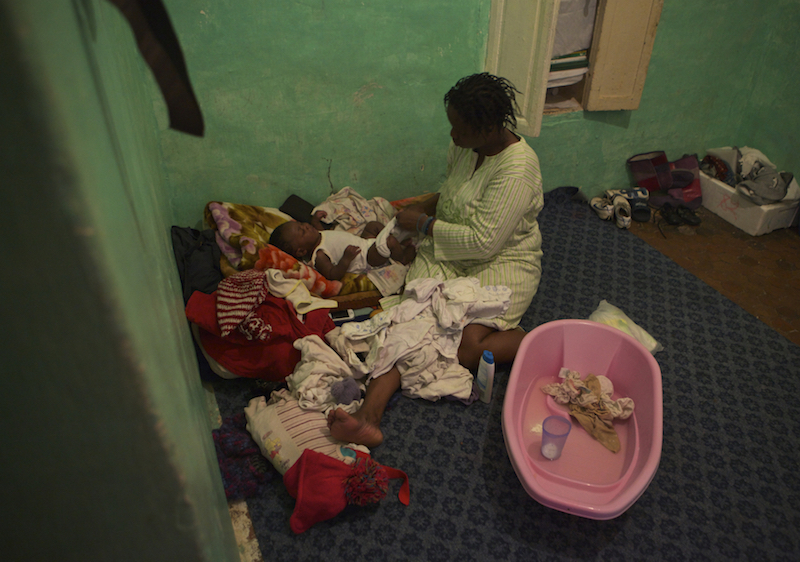 Although Aisha quickly realized that with five children she would not survive in the forest, it was there that she had to spend a long two months.

If you follow the Geneva Convention, Aisha could certainly be qualified as a political refugee - not by choice, she lost her home in two countries, and lost her husband and parents; it wasn't on a whim that she appeared alone with five children in her arms without any form of livelihood. But in order to exercise her right to a refugee status, Aisha needs two things - documents and an opportunity to be in a democratic country that can help her. But Aisha has no documents at all.

Of all her documents there remains a tutu of burned sheets that she was able to salvage from the burnt house. Among them a diploma, a few certificates, documents for already nonexistent house in Côte d'Ivoire. None of them identity documents.

ID - this is what a refugee in Africa loses first. Passports and birth certificates – are very valuable to the gangs robbing refugees on the road. Passports, because in different countries in Africa there is a visa-free regime with other countries. Often, gangs work under the protection of border services, sharing with its representatives earned from the sale and falsification of documents. Aisha lost all documents during the first border crossing. 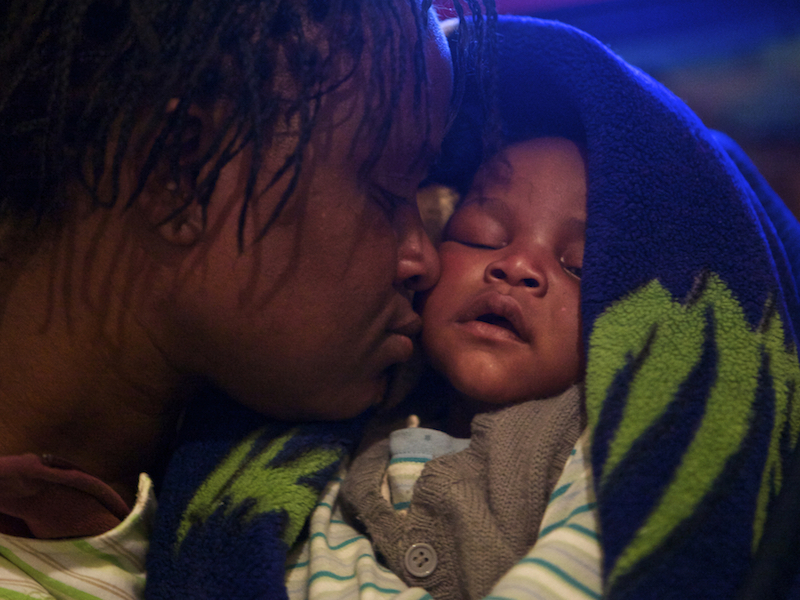 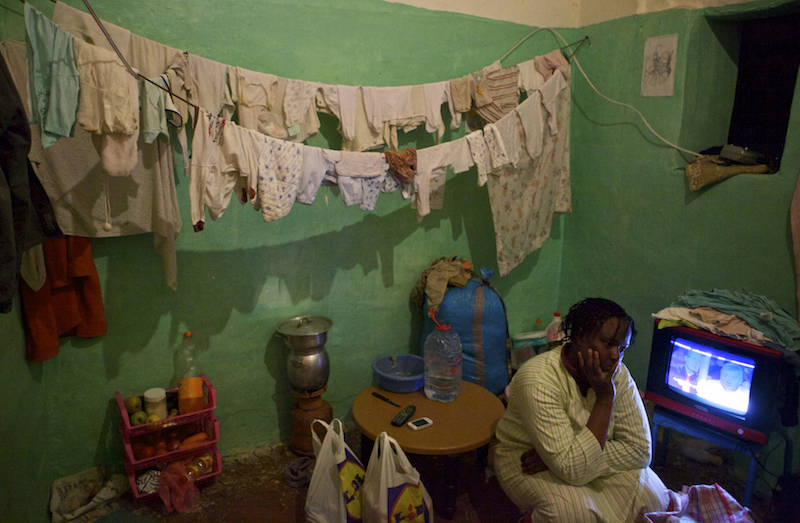 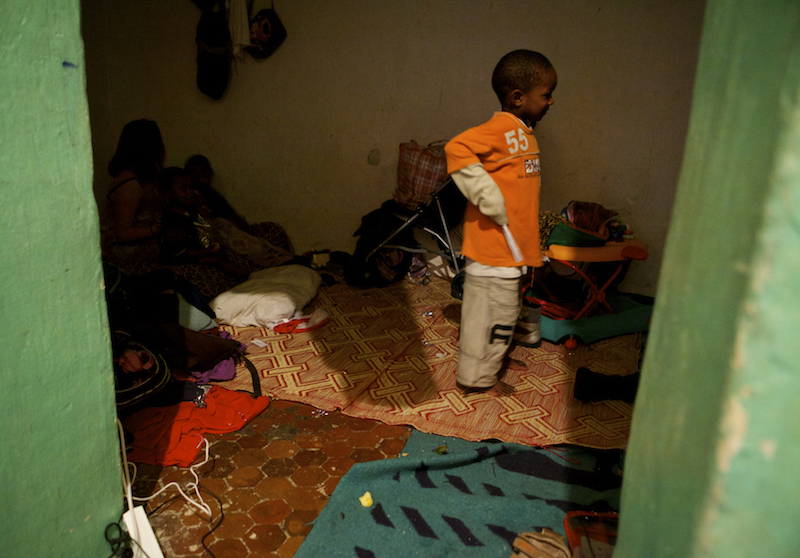 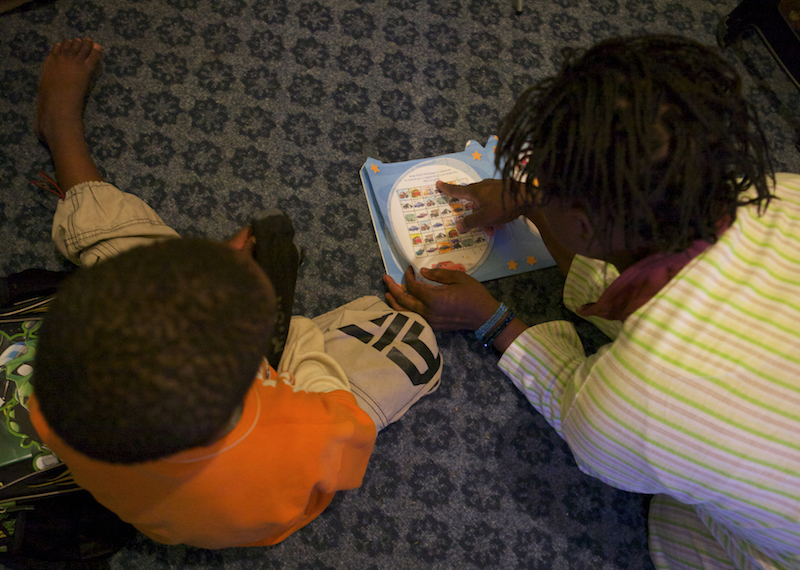 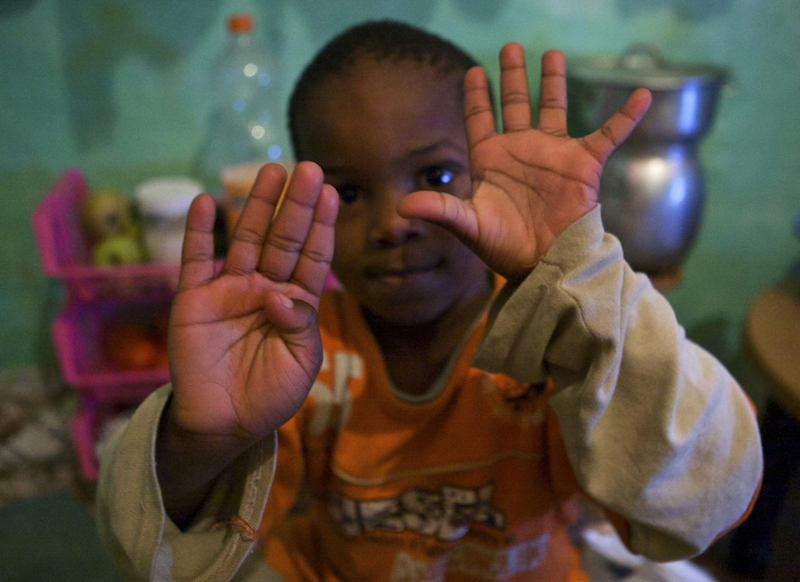 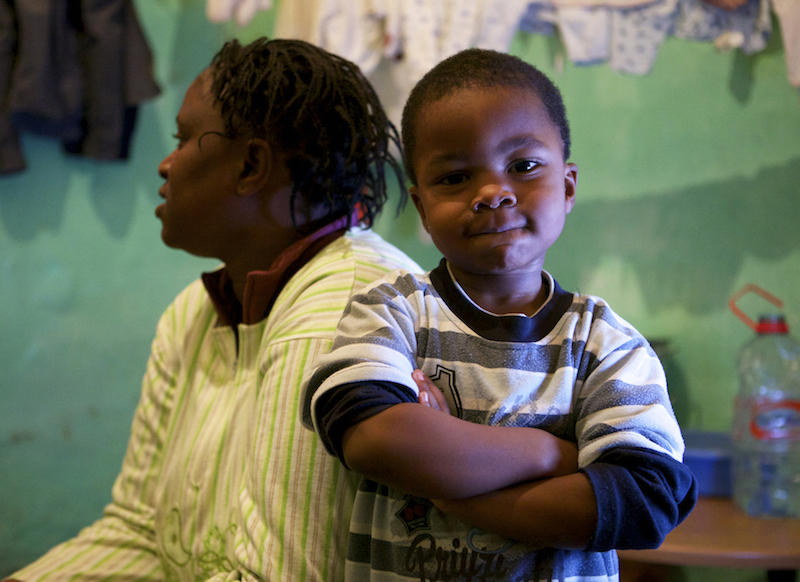 In Tangier squat located near Buhalov populated by refugees, there is the constant smell of hashish and tangerines. A dozen black men, aged 20 to 50 - from Mali, Gambia, Congo, Cameroon, Senegal, and Guinea. In the corner of the room – there is a primus, on which water is boiled constantly in a kettle. Those people are terse, looking as if through you – most of them are survivors of the entire spectrum of violence, loss of loved ones, and many of them - deaths of their own children. Those who describe themselves "Economists", those who run not from a war or violence, but for a decent standard of living – are a stands out minority .- Their slogan is simple: «Europeans must understand that they will have to pay for colonization.»

There are people who are willing to do unskilled hard work, but there are those who want to improve their situation. A man from Senegal, Bachelor of Medicine. His desire to receive a complete European medical education and open a clinic in Senegal.

Another man, Hassan – is a certified public accountant from Congo. He fled from a war, when he was 22, and at 23 – he got married. The route of his movements is incredible: Congo - Cameroon - Nigeria - Benin - Togo - Burkina Faso - Mali - Guinea - Senegal - Mauritania - Western Sahara - Morocco. Now Hassan is 34. His journey took 12 years - as many as his daughter recently celebrated.

Together with a friend, he saved money for a boat to cross into Spain. They bought the boat and one day the friend decided that it was time, but Hassan refused. He checked the weather forecast, and then told his friend that the forecast was unfavorable, and he could not risk the lives of his daughter and wife. Hassan stayed in Tangier, and his friend together with his other seven travel companions attempted to sail across Gibraltar. As a result, the boat sank ,none of the passengers escaped.

Women in Africa rarely migrate on their own accord- risky journeys in pursuit of a better life are taken mostly by men. Women usually get expeled from their homes by wars and worries for children's safety. Risks are endless: battering without apparent reason; robbery, including of documents; rape - almost becomes a norm for female refugees. Cases of rape of children of preschool age are not rarity.

Often, after the rape, women give birth to babies in the forest or desert. Naturally, they do not have any right to obtain documents, so even if the mother wants to give the baby up for adoption, she can not do it legally.

Such a situation creates an incredibly fertile ground for criminal groups involved in human trafficking. A huge network of similar groups working throughout Africa, have partners in Europe, where in general «live goods» are going to, who are used as free labor or for the provision of sexual services. 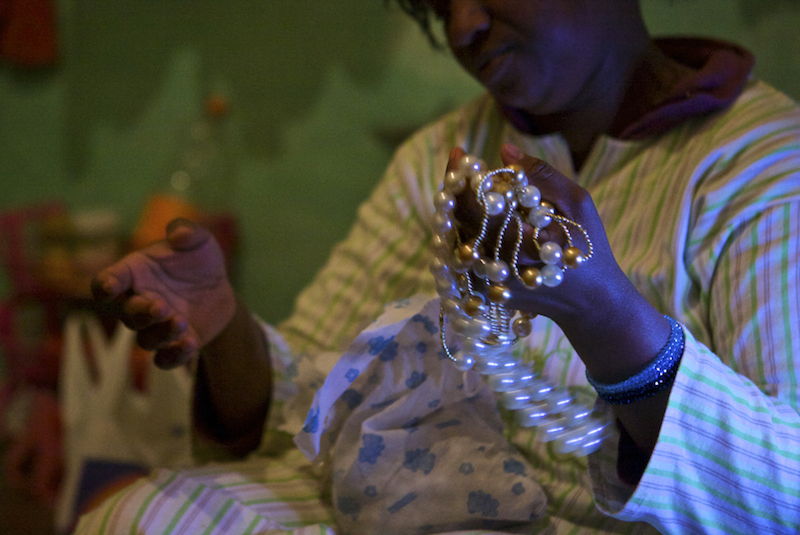 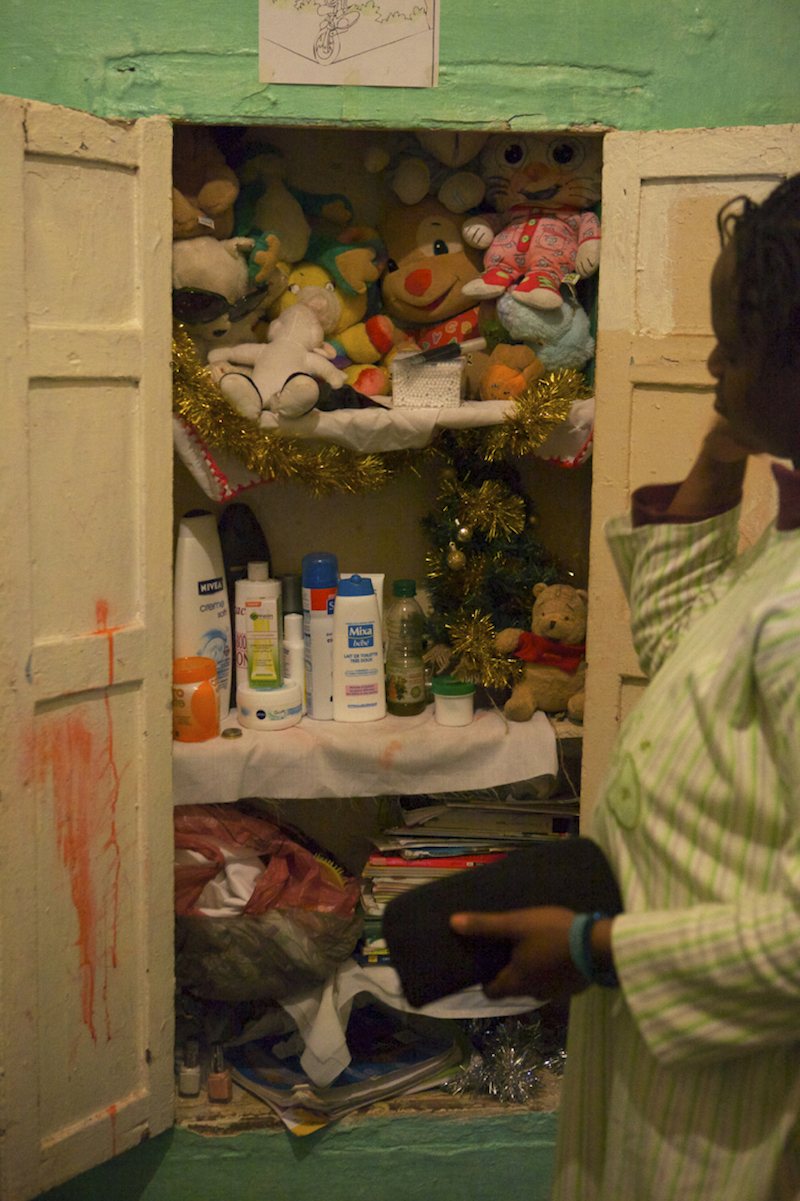 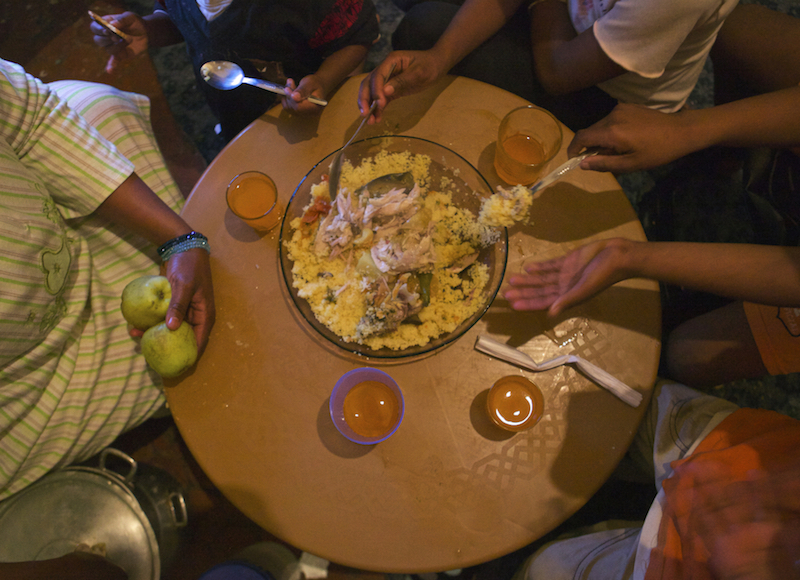 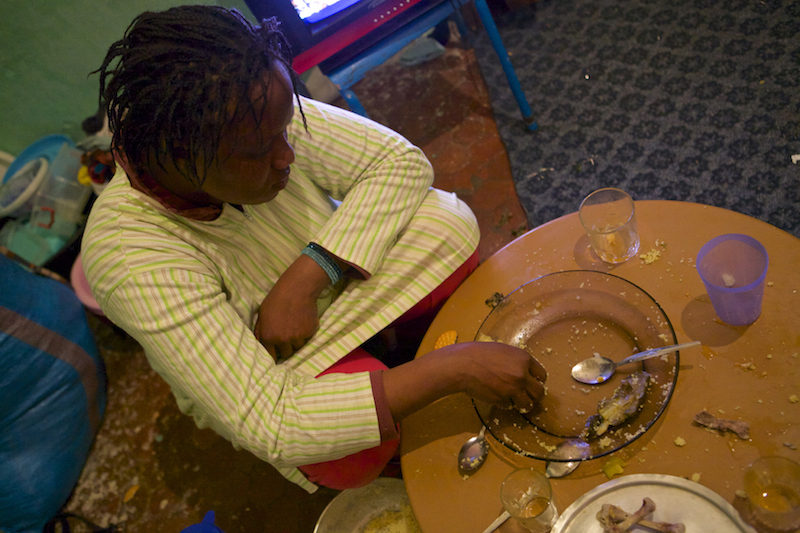 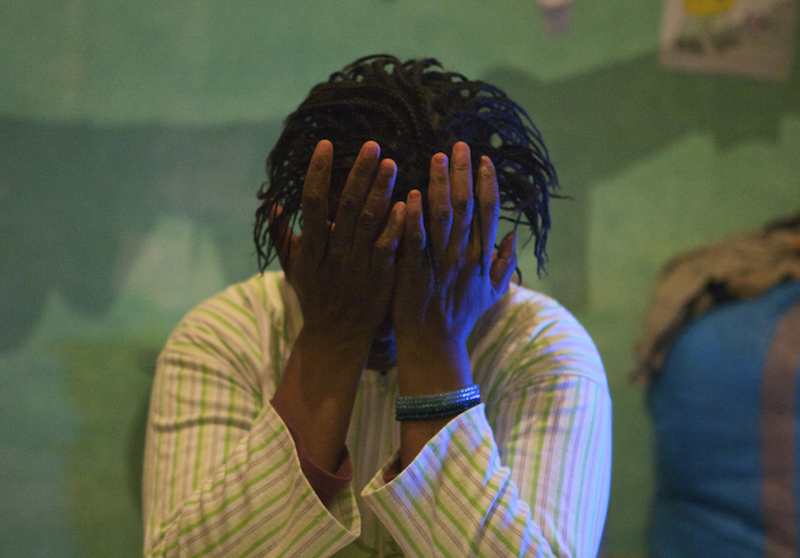 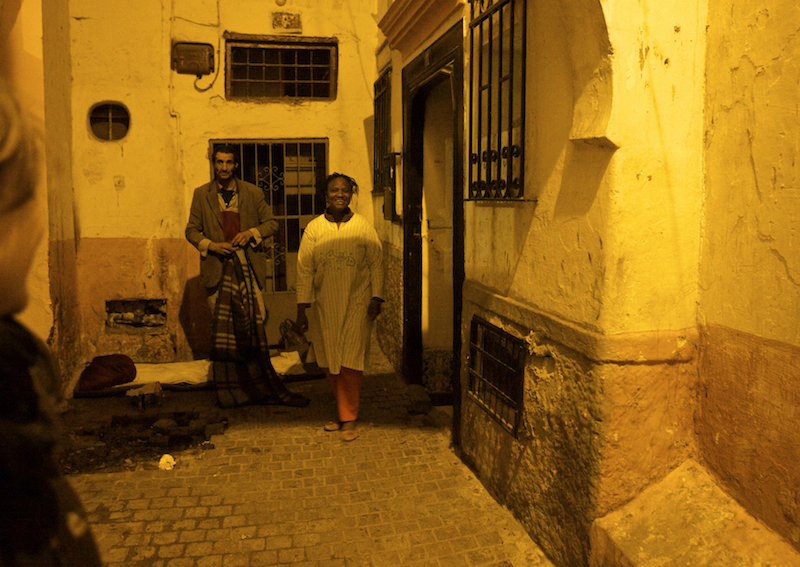 Arriving in Tangier, Aisha was able to find a housing in Medina - a market area, located in the city center. It is, however, difficult to call it 'housing': there are two damp tiny rooms without any windows, and there is almost no furniture. One room is carpeted with blankets, on which the whole family sleeps. In the second one – there is a tiny table and a couple of boxes used as chairs. All of the most expensive things are in a small wall closet: creams, toys, papers, and a tiny Christmas tree that is taken out every year at Christmas.

As you get to know Aisha , you can't help but be struck by her incredible love for children, and how well she brings them up, despite the horrendous living conditions. Everythign she earns by making and selling beads necklaces, go towards food. It's hard to work, because the authorities believe the Aisha's family are illegals, and forbid her to trade in the market. Round the clock, the room is full of laundry, and to see a baby in dirty clothes is impossible. She dedicates all her free time to their eductaion - reading, writing and drawing. The family is incredibly close and friendly - they call themselves «a team.» They are amazingly joyfull, despite what they have experienced. Only in rare moments you can see the tears in Aisha's eyes , which she has learned to hide from children.

July 23 Concert for Stolen Land June 12 Brest Transit. Part 1 May 09 River Theatre, the Flying Dutchman of Belarusian rivers May 07 Ales Dzianisau: “I am an enemy of the state” May 01 Filmmaker Aleksandra Butor: I hate superficial approach to work
END_OF_DOCUMENT_TOKEN_TO_BE_REPLACED