Yes, I am ‘an enemy of the state’: This is how I am labeled in Belarus. And yes, I am a ‘political refugee’: This is what I am called here in the UK. I am proud of being both.

Belarus is known for a well established, and fully equipped official death squad, that kidnaps and kills dissidents and those who oppose the regime; for sustaining more than twenty special police and secret services, and for the torture of political prisoners… not to mention the total negation of a free media, the intimidation of journalists and the virtual decimation of language, tradition and all forms of independent arts and culture. There have been occasions when those who implement the dictator’s decrees receive awards from the Orthodox Church for ‘spiritual development’, even when such a recipient be a known death squad official.

It’s all been told a million times, at numerous gatherings of the global political elite, those charged with confronting such abuses of power. But they don’t, not really. Spurious geopolitical interests and the apparent ubiquity of ‘realpolitik’ counter any meaningful or sustained connection to matters of ethics or morality.

I am not writing to repeat this stuff yet again. It’s all known, and we get that nobody will do anything, as politicians simply don’t care enough about ten million people in a country bordering Poland, Russia and Ukraine. So much easier to use the place as a playground for quasi ‘peace talks’ between a militarily expansionist Russia and a European Union with so much commercial interest that it would never in its worst nightmare assert sufficient pressure on the Kremlin to stand a realistic chance of putting an end to a war.

Today, Belarus is only mentioned in the context of the ‘Minsk Agreement’: Who cares that a dictatorship has been in power there for the last twenty-one years, and will continue to be so, as long as all major political opponents remain in exile, in jail, released, but not rehabilitated, or simply ‘disappeared’?

Here, I am writing to say that when you are labeled as ‘an enemy of the state’ in a country like Belarus, it’s the greatest of rewards and the highest of accolades. Of course, there are consequences: Like placing ones family at risk, having friends killed, having nowhere to live when you find yourself in exile, having to rely on others to house and host you. But who cares? It’s our life, we choose it, and it’s for us to face up to it all. So yes, it’s ‘cool’ to be ‘an enemy of the state’, and to give politicians a story to share with their electorate, and to say, ‘Hey! Look how bad it is over there, but it’s fine in our own backyard, so keep us in power and that bullshit will never happen in our country.’

If you are a well known ‘enemy of the state’ with a clear history of being persecuted in your home country, you could well become a ‘political refugee.’ Don’t get me wrong: in my day to day life, I rarely make that point that if you Google ‘Belarus Free Theatre’, you get 3 times as many hyperlinks as when you Google ‘Alexander Lukashenka’, Belarus’s dictator (1,570,000 to 470,000). 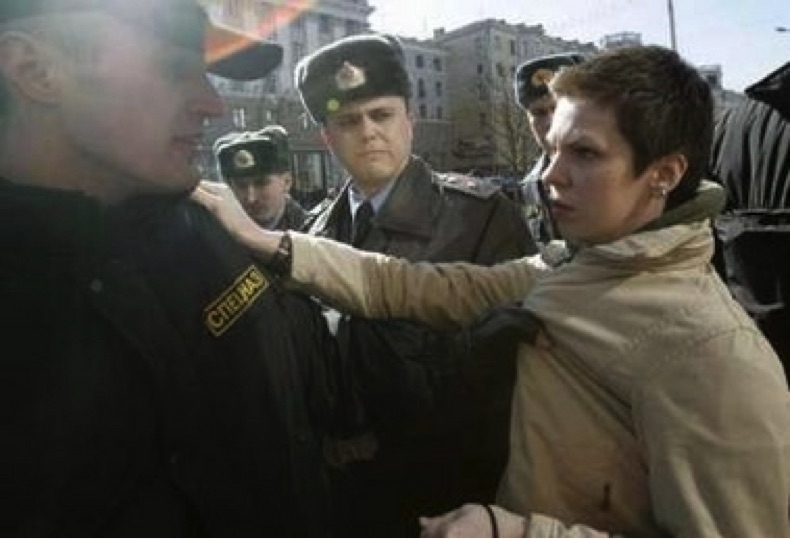 Photo: Natalia Kaliada clashes with officials in Minsk during a pro-democracy rally at the 2010 Belarus presidential “elections”

Even with those hyperlinks, when we asked for political asylum in the UK, on the 18th May 2011, we were questioned for twelve hours. We were fingerprinted in a long cold grey room in Croydon, furnished with metal chairs.
At 11 years old, our youngest daughter could not comprehend the situation.
Why?
Because for her, as for my husband and I, the UK is a country that has always spelt one word: Friends. The people who had spent time with her, our family and our theatre company’s members, had engendered this sense of friendship. Tom Stoppard came to Belarus in 2005, and since that dinner, at the home that is lost to us for good, we have become close, as friends. Tom is the person that worries about our health and wellbeing. In 2011, Michael Attenborough and Joe Corre gave us places to live, and David Lan offered our Theatre a home at the Young Vic. I could list over many pages, the names of the people who mean the UK for us, who mean friendship.

On that particular day in May, we knew we might be detained - we’d been warned about it. But my daughter knew that people were only ever really detained in countries like Belarus. That day we were lucky. We were not detained. That year, 2011, we were granted political asylum. The UK, with all its happiness and all its problems, became our second home. It became our home thanks to those same people who had reached out to us in Belarus. Since then, many more people have joined them, new friends whose kindness and solidarity have only deepened our relationship with London and the UK.

‘Yeah right!’ you may say, ‘she’s the lucky one who was granted political asylum when so many thousands of others aren’t… and of course, she now sings the anthem!’ No, I don’t. You cannot imagine how tired I am of crossing UK border control on my way home from international trips and being fingerprinted, every time, and having my ‘travel document’ quizzically examined by the immigration officials as if a foreign body, as they question me, every time.

Every time this process frustrates and humiliates, but I never complain, thinking only how lucky I am to be safe, to not be in jail, and to have such wonderful people in my life, in this country we now call home.

But recently, on returning from Italy, where our theatre company had been performing the show ‘Trash Cuisine’, after sold out runs at London’s Young Vic and New York’s La Mama, I was detained. And like my daughter four years previously, I was quietly, and simply, shocked. I was issued with a piece of paper stating that my leave to remain and my right to enter the UK was suspended. Fifteen minutes of shame. Only fifteen minutes of shame. Not for me, but for the UK Home Office.

I am Natalia Kaliada. I am a mother of two daughters, Daniella and Maria. I am the wife of Nicolai Kalezian. I have a brother, Yuri, who is a political refugee in the USA. My parents are Andrey and Tatiana Kaliada. My grandfather Andrei Kaliada was a prisoner in Stalin’s gulags. He committed suicide shortly after he was released. I am the ‘enemy of the state’. I am a ‘political refugee’.

I am also co-founding Artistic Director of Belarus Free Theatre. Everyday, our actors and mangers take great personal risk, continuing to teach and perform underground in Minsk. There are nine women and three men who lead the company. We are known in Belarus as a ‘gay’ company. We have toured across five continents, performing and campaigning in more than thirty countries. We haven’t stopped our activities for a single day. We have survived despite all forms of censorship and harassment in Belarus, and ever present financial challenges here in the UK. This year our company is ten years old. We should be proud, but in reality it’s a shame that so often the world’s politicians tacitly sanction the existence of a dictatorship that cannot itself cope with the existence of a theatre company. But for today, we have our underground headquarters in Minsk, Belarus, a Dictatorship, and our primary company base here in London at the Young Vic.

There are only three Belarusians who have full-time jobs as part of the Belarus Free Theatre. So just to be clear, one more time and for the record, in case we are detained again by the UK border control, we are the artistic leaders of the company, and our names are: Nicolai Kalezian, Vladimir Shcherban, and me, Natalia Kaliada. And we are very proud to work with 17 full and part time British staff. They are incredibly creative, passionate and hardworking – including people such as Vasanthi Argouin Fenella Dawnay, Julia Farrington, Paul Finegan, Larry Lynch, Marty Moore, Clare Robertson, Jennifer Reynolds, Lena Zimmer and Georgie Weedon. These people are our second home. Together with them we pay taxes – as individuals and as a company. To the best of my knowledge, these taxes contribute, in part, to the running of institutions such as the Home Office. It would be great to know that our taxes are well spent in this regard, and that any citizen who’s labour supports the existence of such services not be humiliated each time they come home to their families. 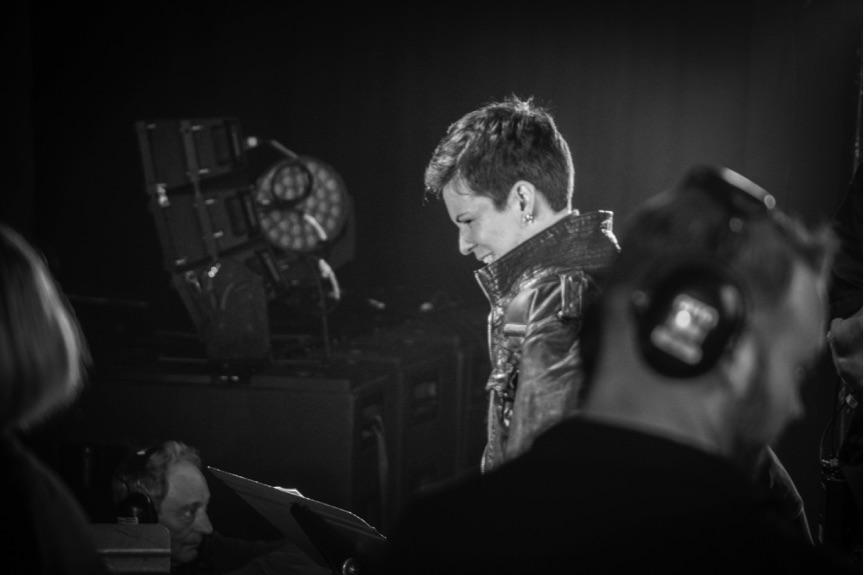 Photo: Natalia Kaliada at Staging a Revolution: I’m with the Banned solidarity concert at Koko. London October 2015 with David Gilmour, Pussy Riot and other banned bands from Ukraine and Belarus. The concert was live-steamed on BBC Arts.

Our shows sell out. We have developed distinctive approaches to teaching young people, supporting them in becoming empowered artists, activists and cultural leaders, critically and politically enlightened, and better able to take responsibility in their own lives and communities. We are the only campaigning theatre based in the UK, and we are the only company making work under the auspices of a dictatorship, deemed to make work of sufficient artistic merit to be received by leading theatres and cultural houses all over the world. 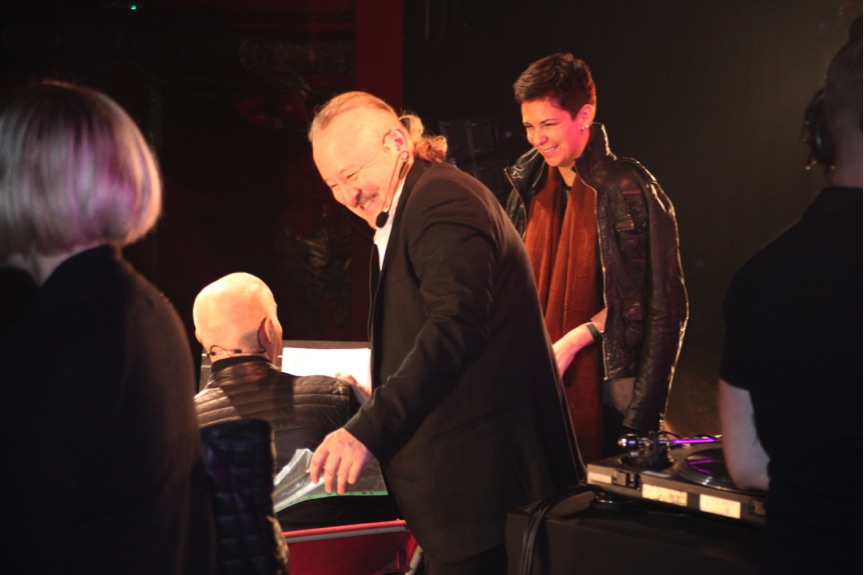 Photo: Kaliada with her husband Khalezin and Pet Shop Boy’s Neil Tennant on stage at Staging a Revolution: I’m with the Banned solidarity concert at Koko. London October 2015. The concert was live-steamed on BBC Arts.

The UK is our second home country. Our children attend school here and our friends have provided us with places to live and work. An obvious question perhaps: ‘What do refugees give back to the countries that take them in?’ In our case, beyond jobs and taxes (and far more important), we bring, through our theatre, our education programs and campaign work, some of the more vital perspectives and conversations of out times, drawn out from our experience of living under and challenging the dictatorial Belarusian regime.

Anish Kapoor, Omid Dijalili, Lucian Freud, Mona Hatoum, Freddie Mercury, Michael Marks, the Saatchi brothers… All people who live in the UK, and who have made a huge contribution to it’s standing as global leader in the arts and innovation. They too are a part of this story.

Irvin Berlin, Kirk and Michael Douglas, Larry King, Marc Chagall… all fled Belarus before contributing to the America’s standing as amongst the more powerful artistic cultures in the world. They came from Belarus, where we come from. We are proud of both our homes.

It’s not easy to criticize the country I’ve come to love. I do so only as I wish not to see the place that has become home to my family adopt any of the habits of my native land, where a dictatorial regime has destroyed the country from underneath.

‘Be not inhospitable to strangers, lest they be angels in disguise’: I grant that we are no angels. We are human beings, and deserve to be treated as such, just like everyone else.