- Would you describe Shakespeare as a political playwright?

- He lived in a time of enormous political stress and ferocious political oppression, when the country was undergoing sea changes in terms of its class structure and emerging out of one kind of policy into another. At the same, a major ideological battle was raging between on the one hand Protestantism and on the other extreme Catholicism and various degrees of shading in between. 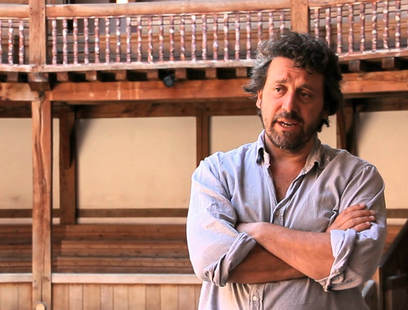 Tremendously diverse political groups formed around these questions and others and above it ruled a State that was determined to hold on to power fairly aggressively. All of these issues ripple through all of his plays.

- What is his most political play?

- You would be a fool to say any of them isn’t political. Timon of Athens, which was Karl Marx’s favourite play, contains swingeing diatribes against the power of money and capital, and how money distorts a proper sense of human worth. But even a play as innocent as ‘As You Like It’ has a fierce sense of political tension.

- You had a very active, occasionally dangerous conversation with the authorities expressed by the Lord Chamberlain, who was there to oversee what was sayable in the theatre. It was a lively and difficult conversation about what was allowed and what not. If things were considered too inflammatory the playwright could end up in prison. Both Ben Jonson and Thomas Middleton spent time in prison for dealing with subjects that should have been verboten.

Shakespeare however avoided this through his remarkable capacity to challenge and provoke on the one hand and to brown nose and arse lick on the other. In the Scottish Play you have a play with an out-of-control despotic king, written four or five years after James arrived in London. He is psychotic, murderous and accountable to no-one and yet, in the middle of it all of the descendents of Banquo present to the Scottish General in the title, a very brown nosing speech to the king.

King Lear is another example of an authoritarian ruler who is out of control and has lost contact with his people. And yet within the play you have a sense that he is listening to the rogues and vagabonds across the country, people who were marginalised as the result of power upheaval.

In the play there are arguments for order, for authority and for maintaining the status quo, and arguments for their opposite. For this reason the play has remained popular in totalitarian states. Shakespeare’s system of coded and ambivalent messages in his plays still communicates to audiences and is still important.

It is the evasiveness of his messages that frightens everyone. We are touring the world with our Hamlet and the one country we cannot take it is North Korea. They will allow music and dance and acrobats, but not a play. The word, the relationships and dynamics between people are deemed to be dangerous.

Shakespeare is a genius in managing to put relations between people both private and public on the stage, without being explicit about their intentions.

- How did you get to know Sarah Kane?

- I worked alongside Sarah Kane at Bush Theatre [Dromgoole worked there first as assistant director, then as artistic director from the late 80s to 1996] where she was literary associate. She wanted to be an assistant director, but we couldn’t give her the job so she came on as a literary associate and became part of the team, working with writers and developing scripts.

- What do you think about the degree of self-exposure in her play 4.48 Psychosis?

- I think she was a very restless modernist, trying to create new forms to encapsulate what she saw as new content. She created different patterns in each play, all very distinct and different in each, one from another. They were very brilliant and very erudite responses to try and deal with a world that she saw as so full of violence and cruelty and viciousness. She believed the modern world couldn’t be contained in old-fashioned forms.

Dominic Dromgoole will be leaving Shakespeare’s Globe in April 2016 after 10 years as Artistic Director there.

Dominic Dromgoole, who knew Sarah Kane, will be joining the after show discussion following the performance of Belarus Free Theatre’s 4.48 Psychosis Monday 2nd November 2015, 6.30pm as part of Staging a Revolution Festival. Watch the live stream on Ministry of Counterculture here.